The seeds of Mandé tradition germinate in the New World

Abdoulaye “Djoss” Diabaté is a Malian musician born to a famous West African griot family. Little brother to the great, world-renowned singer Kassé Mady, he grew up in the celebrated griot village of Kela, Mali. His mother, Sira Mory Diabaté, was a singer who defined her generation.¹ His mothers, fathers, brothers and sisters² were, and still are, at the heart of Mandé culture: the cream of the country’s instrumentalists, singers, dancers, historians and story-tellers. His extended family reads like a who’s who of Mandé music in Mali, Guinea, Senegal, Ivory Coast, Gambia, Guinea Bissau. 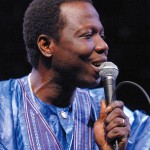 Abdoulaye absorbed all these influences and demonstrated outstanding musical abilities at a very early age. In his late teens he moved to the Ivory Coast, as that country offered greater promise of material well being. He then established residence in Abidjan where he stayed for twenty-plus years. There, he founded Super Mande, a group that established itself as one of the most popular bands in the area. He rubbed shoulders with artists who have since become well known such as Salif Keita, Mory Kanté, Manfila Kanté, Ousmane Kouyaté, and others. They played weddings, parties, baptisms and concerts, touring all over the region and neighboring countries. An LP by the group titled Wahabiadashi was released in the mid-seventies but because the title track criticized a marabout (religious leader) for hypocrisy, the album stirred controversy and was banned from airplay. This contributed to stifling the band’s opportunities for greater success.

Eventually, Abdoulaye was noticed by Souleymane Koli, the choreographer and director of the world-famous Ballet Kotéba and the girl band Les Gos de Kotéba, and was recruited by him to tour with the Ballet as a singer, and with the Gos as a guitarist. For many years he toured Africa and the world with them.

Meanwhile, he had fallen in love (a love story that rivals Romeo and Juliet — minus the suicides), married and was head of a growing family. Life in Africa was uncertain and his situation with the Kotéba organization, despite all the touring, did not yield substantial rewards. Therefore in 1996 he saw an opportunity to try his luck in New York City and he decided to take it.

The arrival in the City of this great Mandé voice stirred excitement among the African music community. Everybody wanted to work with him, have him grace a track on their project, front their band, or just play with him to be by his side when he opened his mouth and stimulated his vocal cords to produce the amazing sounds that in this case we deceptively refer to as singing; his vocal prowess and his personality burst with spontaneous creativity, inevitably perking up any musical situation, generating excitement and delight. 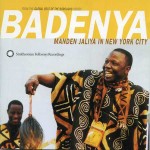 In a short time he became the leader of the Mandé griot community in the United States, a fact demonstrated by his participation to the Smithsonian-Folkways release “Badenya; Manden Jaliya in New York City,”³ the cover of which is graced by his beaming, irresistible smile. In that photo, and in person, he bears an uncanny resemblance to the greatest American musician of all times, Louis Armstrong, with whom he also shares the qualities of innovative musical talent, indomitable spirit and an infectious joyous disposition.

As an immigrant to America, Abdoulaye has been open to anyone who approached him and has wholeheartedly delved into even the most unfamiliar musical situation, yielding some extraordinary music along the way. This has led to collaborations with artists such as Don Byron, Peter Apfelbaum, Mamadou Diabaté, Banning Eyre, FULA  FLUTE, SOURCE, Dallam Dougou, Sean Noonan, Andy Algire, David Racanelli, and many others.

However, being a griot carries important social responsibilities, the highest of which are to tell the truth and inspire elevated thoughts and emotions. It defines one’s position in life, and musical expression, albeit important, is just one facet of a complex role. The Mandé word for griot is djely, which means blood. Therefore the griot is like the blood of the community, uniting it, nurturing it with meaning and remembrance. In an oral culture, the griot bears witness and recognizes people and their deeds for posterity, giving them reality. In the spirit of carrying on this tradition, Abdoulaye has re-created Super Mande in America with which he has brought traditional music into schools, universities and communities across the US. He recently presented his first traditional music release: SARA (Completelly Nuts/Mulatta Records, CTN-003). 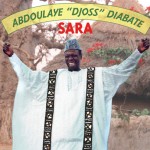 In this new album, produced by ethno-musicologist Thomas van Buren and himself, Abdoulaye is accompanied by the finest Manden musicians in New York. Eight new tracks present the sound of praise singing, love ballads, and songs of advice and celebration.

Abdoulaye “Djoss” Diabaté represents, in this author’s opinion, as pristine and unadulterated a source of elevated musical expression as presently still remains on this planet. It is a joy and a privilege to experience his artistry so closely.

1 The renowned French journalist Hélène Lee has said of Sira Mory Diabaté’s artistry: Far from having a pretty voice, Sira Mory Diabaté produces a raucous and disturbing sound. Although she was an enviable singer in her youth, this griotte from Kéla was the victim of a spell, which caused her to fall ill and lose her voice. But instead of disappearing from the scene, she became the most feared and the most respected female singer in post independence Mali. It was to her (or in her masculine guise, Banzoumana) that the national radio entrusted the announcement of grave events: wars, the death of a well known person….”When you hear her voice you are afraid”, said her contemporaries. But her words are unequalled in terms of their classic purity and depth. In this song, she says that even a clever hairdresser is liable to make a mistake when plaiting tresses but she can tell a story putting each word in its rightful place so that not a single grain of the truth escapes. (http://www.mali-music.com/Cat/CatM/Mandekalou_En.htm)

² In Africa, your father’s brother is your father. The same closeness applies to aunts, uncles and cousins.