The Hand of Fatima is a feature-length documentary structured by two parallel journeys to the remote Moroccan village of Jajouka, where a hereditary band plays music older than history.

The first journey begins in the 1960s, when critic Robert Palmer uncovers “cryptic allusions” to Jajouka in the novels of William Burroughs. On assignment for Rolling Stone in 1971, Palmer finds the place where the musicians spend their days smoking kif, playing music, and “driving possessed tribesmen into mass Dionysian frenzies.”

In 2006, filmmaker Augusta Palmer makes her own pilgrimage to the village after inheriting the Moroccan necklace her father wore as an emblem of his connection with the Master Musicians. On her quest to understand her father’s initiation into this ideal musical family, Augusta interviews Yoko Ono, Anthony DeCurtis, legendary producer Bill Laswell, and singer/songwriter Donovan about her father’s musical legacy and the uniqueness of Jajouka.

The filmmaker also visits Palmer’s four wives to get their perspectives on the music, magic, and madness Jajouka brought into Palmer’s life. Bachir Attar, the Master Musicians’ current leader and a close friend of the elder Palmer, welcomes Augusta to his mountain village and provides a glimpse into the musicians’ rich history, replete with pan worship, rock stars like Brian Jones of the Rolling Stones, jazz legends like Ornette Coleman (listen toaudio file below, and Beat writers like Burroughs and Brion Gysin.

Animated sequences based on Robert Palmer’s writing about Jajouka are intercut with the live action of Augusta’s 2006 trip to the village. A perverse mix of Romare Bearden and Monty Python, these animations mark the filmmaker’s progressive immersion into her father’s hallucinatory experiences, literally allowing audiences to see what he believed about the village while Augusta experiences the village’s contemporary reality. Together with her infant daughter and one of her three stepmothers, Augusta makes peace with Robert Palmer’s life and legacy through the ritual sacrifice and trance music of Jajouka.

A poem by the Persian mystic Rumi talks about a place where people go “back and forth across the doorsill where the two worlds touch.” In Rumi’s poem, this door is “round and open,” a reminder to stay awake to the wonders of the universe. The two worlds he speaks of may be the worlds of the dead and the living, of men and women, the magical and the real, or the Islamic world and the West. The Hand of Fatima is a film that straddles all of those divides and builds a bridge to connect them. On a very personal level, the film is a journey to make peace with my late father, Robert Palmer. He was both a genius and a difficult man whose ambitions and addictions overshadowed those closest to him. In willing me a necklace that symbolized his encounter with Jajouka, however, he gave me the most valuable thing he had: a connection to the place whose music and culture made him feel at home in the world. He also gave me a connection to my three amazing stepmothers, who became my guides on this journey. Finally, he left behind a trail of artistic influences to inspire me. The work of his heroes, William Burroughs and Brion Gysin, inspired me to create the animations in the film. Using my own drawings, photographs by British photographer Paul Misso, and a host of other found materials, I worked with animator Hongsun Yoon to create a visual equivalent of Burroughs and Gysin’s literary cut-ups that I paired with the voice of music writer Ned Sublette to create my father’s side of the Jajouka story. This work, as much as my physical travel to the village of Jajouka, enabled me to truly understand the musical legacy my father wanted to leave me. Throughout the five years of making the film, however, I’ve hoped that this very personal story of music, mysticism, and family history will also open more important doors. In the continuing aftermath of September 11, 2001, I have been shocked by the ways in which cultural “doors” between the U.S. and the Islamic world have been sealed off by political rhetoric, fundamentalist religion, and old-fashioned fear of the Other on both sides of this cultural divide. The village of Jajouka is a place where that door remains open. During the past hundred years, The Master Musicians of Jajouka have played not only for Morocco’s sultans, but also for a host of Western visitors – from Ornette Coleman and William Burroughs to Mick Jagger, Donovan and Lee Ranaldo.

In the course of many interviews about Jajouka, I have been struck by the way each subject’s face lights up when they describe the village. Record producer Bill Laswell told me that it is a place entirely apart, where our normal concerns don’t apply, a sacred, hidden space. Donovan said in an interview with me that the trance rhythms played by the Master Musicians put you in touch with your hidden self, with the unified field that connects us all. This is a music that refuses to recede into the background, that insists on becoming the center of life. I feel very privileged to have experienced Jajouka’s music for myself in the same village where it has always been played. And I feel very lucky to have been given access to make a film there. In 2006, my crew and I filmed the Master Musicians celebrating their biggest yearly festival, Eid el Kabir. My infant daughter and one of my stepmothers came along for the ride, providing a feminine balance for Jajouka’s intense masculinity. The music took me to a place where I could understand and make peace with my father. Anchored by my voice-over, augmented by interviews, and enlivened by animated versions of my father’s writing on Jajouka, I hope The Hand of Fatima will remind viewers to re-visit Rumi’s Rumi’s open door between worlds.

Bios of the Film’s Subjects

A native of Little Rock, Arkansas, Robert (Bob) Palmer worked as a contributing editor for Rolling Stone for nearly three decades. He was the New York Times’ first full-time rock writer and went on to become their first pop music editor. Starting in his early teens, he was also a phenomenal musician who played in public as often as he could. He played clarinet, saxophone, flute, and guitar and co-founded the seminal sixties band The Insect Trust. He jammed with Ornette Coleman, Bono, and the Rolling Stones. Bas a writer, he is best-remembered for his book Deep Blues, but also wrote Rock & Roll: An Unruly History, as well as books on Jerry Lee Lewis, Lieber and Stoller, and a monograph on music from Memphis and New Orleans. Palmer died in November of 1997, while awaiting a liver transplant in a Valhalla, NY hospital. An anthology of his writing entitled Blues & Chaos: The Music Writing of Robert Palmer, edited by Anthony DeCurtis and published by Scribner, is due out in November of 2009. 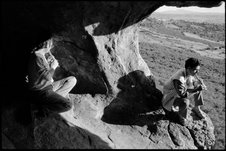 Bachir was only 4 years old when he began studying the music of Jajouka under his father, who was the leader of the musicians until his death in 1981. After his father passed away, Bachir inherited the role of leader of The Master Musicians of Jajouka and has since devoted his life to preserving themusic of his village. As Bachir says in The Hand of Fatima, he has become an ambassador for Jajouka: “I have to travel to save this music. We can’t just hide it in the village. If we did, it would have died a long time ago.” Bachir has played gimbri, ghaita and lira all over the world, both with the Master Musicians and as a solo artist. He has performed and recorded with a wide range of musicians, including Debbie Harry, Ornette Coleman, Talvin Singh, Bill Laswell, Maceo Parker, Lee Ranaldo, and The Rolling Stones. 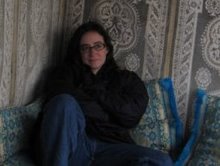 Augusta is the daughter of musician and critic Robert Palmer. She is an artist, scholar and filmmaker who holds a Ph.D. in Cinema Studies from New York University. She has also written about film for indieWIRE and Filmmaker, and has taught film history and criticism at N.Y.U., Sarah Lawrence College, Brooklyn College, and the School of Visual Arts. She co-directed If You Succeed (2007), a feature documentary about a young entrepreneur trying to start a business and save his failing marriage, which screened at San Francisco DocFest and the Little Rock Film Festival. The Hand of Fatima marks her debut as a solo director. She lives in Fort Greene, Brooklyn with her husband and children.

The Master Musicians of Jajouka As residents of the small village of Jajouka in the Djebala hills of Northern Morocco, the Master Musicians are a hereditary brotherhood who preserve one of the oldest known musical traditions on the planet. Recognized for their music by the Moroccan royal family, by jazz masters like Ornette Coleman, rock gods like Brian Jones (who recorded the musicians’ first album, Brian Jones Presents the Pipes of Pan at Jajouka, in 1968), the Master Musicians begin learning complex rhythms and melodies as children in order to become true maalimin, or masters. The Master Musicians of Jajouka play a variety of folk, ancient and newly written musical pieces on traditional, locally made instruments: the double reed rhaita, the lute-like ghimbri, the bamboo flute (or lira) and several sizes of handmade drum. Many of the compositions in their extensive repertoire are unique to the Attar family and their traditions in Jajouka. Boujeloudia, the ritual music of the “father of skins,” Boujeloud, is performed in the village during the week long festival of Aïd el–Kebir. Hamza oua Hamzine, their oldest and most complex musical number, was played by the Jajouka Masters for the Sultan, both in his palace and on the battlefield. The Hadra summons the spiritual energy of the holy saint buried in Jajouka, Sidi Ahmed Sheikh, who is said to have blessed the Attar family and their music with baraka and the power to heal people of mental and physical illness.

The Master Musicians of Jajouka

Ornette Coleman & The Master of Jajouka: