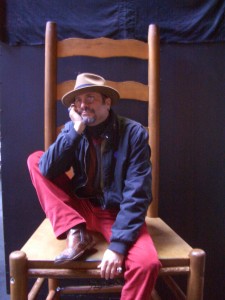 This piece was first published in Signal to Noise in Winter, 2005.

Like Louis Armstrong, Charlie Parker and Ornette Coleman before him, Albert Ayler’s life became a mission to raze jazz to the ground and reinvent the music on his own terms. Demanding total artistic freedom, Ayler heroically expressed himself with a range of sounds, colors and depth of emotion that few musicians (then or now) have been capable of producing. Breaking down conventions of tonality and timing Albert spearheaded a collective group of improvisers whose riotous “energy music” inspired Down Beat editor Dan Morgenstern to describe Ayler’s sound as “a Salvation Army band on LSD.”

By refusing to swing or blow over traditional chord changes, Albert not only managed to alienate himself from the public but from many of his fellow musicians as well. Ayler would abandon the innovations of bebop, claiming the music was too simple, comparing it to “humming along with Mitch Miller.”

Sohrab’s comment on Albert’s sax sound: this is ” Summertime” from the album “My Name is Albert Ayler.” This is the greatest cover vesion of this Gershwin song I have ever heard. I heard it for the first time in Osaka in 1976 when I was listening to Jazz music in a Jazz coffee shop called “Cole”.
It was the time when I started to play sax. After listening to Albert’s sax I was sure that my sax playing was already on the right track. His sax told my sax: Just play sound and don’t car so much about the key”. Is this the reason why Ornette Coleman loves my sax sound? (Comment by the editor)

“It’s a new truth now,” he proclaimed. “And there have to be new ways of expressing that truth.” Like his hero/mentor John Coltrane, Albert believed that music could be used as a tool to change people’s minds and to put an end to ignorance and war. Ayler’s dream was to bring peace to the world through his much-maligned music. “Our music should be able to remove frustration, to enable people to act more freely, to think more freely,” he declared.

“Albert was the epitome of gut! The core of his music was so spiritual. It came right from the gut… such an emotional force. You had to be in the same room with him for a minute and you’d get it! With Albert, it was just about being present, you were in the moment, putting it all in the sound,” trombonist Roswell Rudd told me. “He was really fun to play with! He played such a good lead. It was easy to complement with trombone. Albert was the essence of a live sound. It’s really a testimony to his power that his recordings still get to people now. A lot of people don’t record well. Their power doesn’t get into recordings too well. I’m thankful that his records can give a clue to people now what was going on.”

Born July 13, 1936 in Cleveland Ohio, Albert, the eldest son of Edward and Myrtle Ayler, grew up in the racially integrated upper middle class suburb of Shaker Heights. Six years later Albert’s younger brother, trumpeter and co-conspirator, Donald, was born on October 5, 1942. A baby sister died at birth, unnamed. His mother once recalled that at the age of two Albert held a footstool up to his mouth and blew on the leg, as if it were a horn.

After watching Albert mimic playing a horn to Lionel Hampton and Benny Goodman records, Edward gave his son his first saxophone lesson and took him to experience Duke Ellington and Count Basie’s bands live. Insisting that Albert practice incessantly, Edward wound up venting his personal frustration by beating the boy when he only wanted to go out and play with his friends in the street. On Sunday mornings Albert could often be found playing duets with his father at church.

Even as a child Ayler had a penchant for playing free music. He later claimed, “I’d be playing a ballad and my father would say ‘get back to the melody, stop playing that nonsense.’ But I knew there was something there. I’d be standing in a corner playing and trying to communicate with a spirit that I knew nothing about at that particular age.”

Edward Ayler continued tutoring his son until the age of ten when Albert began his formal musical training with Benny Miller at the Academy of Music in Cleveland. Miller had locally performed with Charlie Parker and Dizzy Gillespie and also traveled to Africa to study the roots of black music. Albert’s technique soon improved to the point where he played first chair in the John Adams High School band. He also doubled on oboe. Miller claimed the young Ayler had a photographic memory for sheet music. He soon earned the nickname of “Little Bird” for his uncanny ability in replicating Charlie Parker’s fluid bebop solos. Ayler later claimed to have met Bird in 1955. Upon shaking his hero’s hand Albert said he instantly recognized “a spiritual quality in the man.” 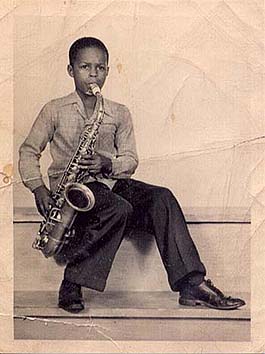 As a teenager Ayler was all but consumed by his passion for jazz; only his love of golf could rival his obsession with his horn. In an era when the sport was anything but integrated Albert became a champion golfer, displaying tremendous skill and grace on the fairways. For a short time he actually entertained the notion of turning pro.

By age fifteen, Albert joined his friend tenor saxophonist Lloyd Pearson’s group, the Counts of Rhythm. At a jam session at Gleason’s Musical Bar, they met Little Walter (Jacobs), famous for blowing amplified blues harp with Muddy Waters. Little Walter hired the two teenage boys on the spot as his new horn section and gave them their first taste of life on the road.

Albert was “so excited he could hardly believe it,” Edward Ayler said, recalling the day his son burst through the front door shouting “They’re gonna take me with ’em, they’re taking me!” But it wasn’t long before Albert began to sing the blues himself between the hard traveling and hard drinking he was suddenly exposed to.

Ayler felt that being out among “those deep-rooted people” was an important learning experience. Sadly Albert and Lloyd were nowhere to be found on the album’s credits when Little Walter cut his next disc for Chess Records.

Speaking of this song: nothing is special about the song. Speaking of his soprano sound. Nobody I know of sounds like him. Did he use a special reed or mouthpiece to make such a crispy and emotional sound? Please listen to the ending of the song where he plays ” meodically – out”. (Comment by the editor)

Although gutbucket blues are an immediate, powerful medium for personal expression, Ayler found little challenge in playing the music. He would often experiment with pitch and “false fingerings” while on the bandstand, much to the chagrin of the musicians he played with. (Oddly or perhaps sadly enough, the last song on Albert’s last album Music is the Healing Force of the Universe is a blues entitled “Drudgery,” which featured the California boogie band Canned Heat’s guitarist Henry Vestine and a rhythm section keeping 4/4 time. Ayler’s sax growls bitterly, as if he finally abandoned his holy mission of seeking new forms of expression and had surrendered to the blues.)

Lloyd claimed that Ayler “was more advanced than anyone. He had a helluva technically big tone. It takes a long time to get a tone of that quality,” Pearson said in his colleague’s defense, pointing out that Albert was quite adept at playing “standard tunes like they weren’t nothing.”

After graduating high school, Ayler attended college briefly but dropped out to join the army in 1956. Stationed at Fort Knox, Kentucky, Albert jammed with saxophonist Stanley Turrentine as well as bassist Lewis Worrell and drummer Beaver Harris, who would eventually join Ayler’s band. While in the army, Albert traded in his alto for the more robust tone of the tenor sax, claiming the larger horn possessed the true sound of the ghetto.

During his stint in the army Albert was forced to play concert music up to seven hours a day. Ayler hoped his cohorts might want to expand their musical horizons beyond the army repertoire, but the commanding officer forbid Albert’s band mates to talk to him, claiming he was insane.

In 1957, Albert, along with Beaver Harris, was shipped over to France where the pair frequently jammed and hung out in Paris nightclubs. Although Harris was impressed by Ayler’s “super chops” he still thought Albert was “more or less a honky-tonk player.”

While in Paris, Ayler became obsessed with the French National Anthem, “La Marseillaise” which he jokingly nicknamed “La Mayonnaise.” The rousing anthem became the inspiration for a handful of his future compositions including “Infinite Spirit,” “Spirits Rejoice,” and “Light in Darkness.”

A photograph of Albert dated November 9, 1958, shows him in uniform, blowing tenor sax with the T.N.G. 3rd regiment big band. Feeling alienated and estranged from his fellow musicians, it was at this time that he claimed he received “the call” while listening to a John Coltrane record. Mesmerized by the power of ’Trane’s tenor, Ayler believed the great saxophonist was speaking directly to him through his horn.