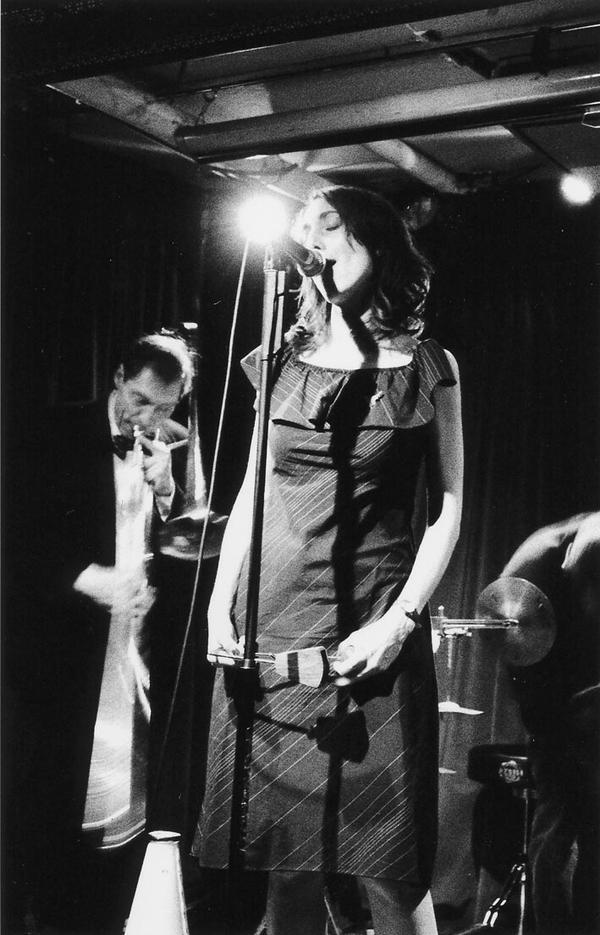 Yvette Perez is a new york based vocalist, songwriter, keyboard player, and bandleader of two avant-pop groups h*e*r and birdbrain. Her work is influenced by the effects of everyday industrial environments on personal psychology, women, and ambiguous identity. the milieu of oppressive crowded freeways, burning refinery flames, and car dealerships in the restricted home environment of an obsessive, agoraphobic single-mother of her Southern California childhood permeates the stories in songs about the mysteries of housework and nature. This tradition continues as the overbearing brooklyn-queens expressway dominates the view and soundscape of her apartment in Brooklyn, NY.

Perhaps the only adopted Iranian with a Mexican surname, racial ambiguity, identity and her search for her biological family and Iranian roots play an integral part in Yvette’s work.

I have been working on other projects a lot the last few weeks but on Friday I got an astounding call from my friend Yvette.
A couple of months ago I filmed with Alana and Yvette who both contacted me after I posted my op-ed on donor issues. Yvette is an old friend, and it turns out she was adopted and had recently begun unraveling the complex tale of her birth. Alana is a donor kid who has written a screenplay and some terrific songs about her past. Yvette is also a musician so I thought it would be interesting to get their take on how their adoptive/donor conceived status affected them and their work.
When we sat down Yvette explained that her birth mother was a college student who had been impregnated by an Iranian exchange student. For many years she had been trying to track down information about her birth parents and had managed to make phone contact with her birth mother, but her father proved to be more elusive. She had a picture but that was it- until two weeks ago.
Late one night she got a google alert on her father’s name. She followed the link and found that a man had responded to an old post from a half-sister (as an exchange student her father had been very busy and she has a half sister that’s three months older than her) who was seeking information about her father. The respondent said that he had information that might be useful. Yvette contacted him and found that he too was the son of the elusive Iranian and that he was on the hunt as well. Her new half-brother, G, has a twin brother. Their father was married to their mother for 6 years but divorced and dissapeared when the boys were one year old. Pooling their resources and their know how Yvette, her half sister and two new half brothers (the poster has a twin) quickly made progress.
In addition to making progress on their shared search they also got to know each other a bit. One of Yvette’s new half brothers, G, was fairly aggressive and soon found that their father had re-married after leaving their family and that he has two younger daughters. Through contacting one of the daughters on facebook he eventually reached their father and got him to agree to meet with him soon when he “travels for business”.
I filmed a performance that Yvette put together to deal with the new information. it’s posted below. It was a haunting and beautiful event and it became clear while watching it that while yvette’s story has a lot to do with the documentary that I’m working on, it also deserves a more thorough treatment. Yvette is a wonderful storyteller and artist. Rather than make a straightforward documentary about her search we have discussed the idea of a documentary that tracks her efforts to put together a performance based on her work. As such it will be part narrative of her life and part narrative of her struggle to take these complex and personal stories and weave them into a work of art that will define her life as an artist…
In the meantime Alana is back from Iceland/Sweden and we are going to finish the script. Yvette, Alana and I got to sit down with the camera as well this weekend.
This video is a work-in-progress performance of “Adoption Story”. This performance chronicles recent events in her search for her Iranian birth father. Also performing are Danny Tunick, Peter Zummo, and Sohrab Sadaat Ladjevardi.