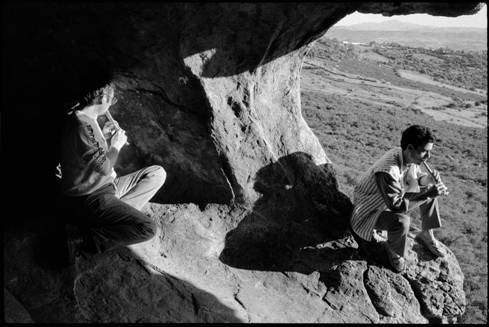 Edited by Anthony DeCurtis and published by Scribner

Daughter of rock critic Robert Palmer travels from Mississippi to Morocco to investigate her father’s 1971 encounter with the men William Burroughs called “the world’s only 4000 year-old rock band.”

October 28, 2009 – Filmmaker Augusta Palmer takes us on her personal journey of making peace with her late father, New York Times music critic, Robert Palmer with a night of music celebrating Palmer’s legacy with all proceeds to benefit his favorite band, The Master Musicians of Jajouka at Le Poisson Rouge on November 16, 2009. Palmer’s admirers range from Bono to LaMonte Young and his work is being celebrated in Blues &Chaos: The Music Writing of Robert Palmer a collection edited by Anthony DeCurtis and published by Scribner, and The Hand of Fatima, a documentary directed by Palmer’s daughter about his collaborations with The Master Musicians of Jajouka, an ancient Moroccan musical brotherhood led by Bachir Attar, who will be on hand for many of the events.

Says Palmer, “On a very personal level, the film is a journey to make peace with my late father, Robert Palmer. He was both a genius and a difficult man whose ambitions and addictions overshadowed those closest to him. In willing me a necklace that symbolized his encounter with Jajouka, however, he gave me the most valuable thing he had: a connection to the place whose music and culture made him feel at home in the world. He also gave me a connection to my three amazing stepmothers, who became my guides on this journey. The work of his heroes, William Burroughs and Brion Gysin, inspired me to create the animations in the film. Using my own drawings, photographs by British photographer Paul Misso, and a host of other found materials, I worked with animator Hongsun Yoon to create a visual equivalent of Burroughs and Gysin’s literary cut-ups that I paired with the voice of music writer Ned Sublette to create my father’s side of the Jajouka story. This work, as much as my physical travel to the village of Jajouka, enabled me to truly understand the musical legacy my father wanted to leave me.”

ABOUT THE FILM “THE HAND OF FATIMA”

“An incandescent film about a divinely intoxicated spirit.”

“Augusta Palmer’s quest for her father’s legacy, and mystery, opens out into a far-off world of sound and spirit, carrying memory, surprise, joy, and enlightenment. Tracing the journey of the late Robert Palmer, extraordinary musician and critic, THE HAND OF FATIMA leads us to experience the remarkable Master Musicians of Jajouka in Morocco, along with the cultural moment of a generation ago, when Palmer, with the Rolling Stones, Ornette Coleman, and William Burroughs, discovered the presentness and timelessness of their art.” –Robert Sklar, Contributing Editor, Cineaste Magazine

“…this is film as an investigation into myth, self-creation and the complexities of personal relationships. I found it profoundly moving, as well as sharp, funny, and bittersweet…a kind of emotional thriller.”

Robert Palmer left Little Rock and made good as the chief pop critic at the New York Times, traveling easily and knowingly between the worlds of Yoko Ono and Sonic Youth, RL Burnside and William Burroughs. Revisiting the remote Moroccan village where music may have begun, filmmaker Augusta Palmer explores the transcendent siren of the Master Musicians of Jajouka, coming to terms with her father’s passions and legacy, his drug abuse and ex-wives, his abandonment of her. This daughter’s unflinching portrait of her unsettled, genius father—author, musician, record producer—is a personal journey of reconciliation, of myth-making and myth-breaking. Palmer the father was adopted by the last generation’s Jajouka master, the Otha Turner of their Hill Country, allowing Palmer the daughter — and us — an intimate visit to an elusive world. – Robert Gordon, Author It Came from Memphis and director, Johnny Cash’s America