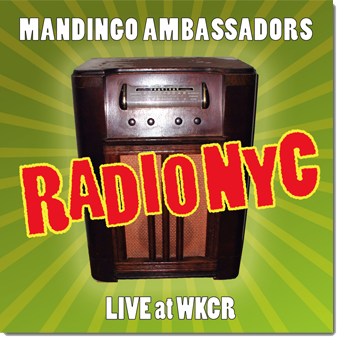 With a weekly residency at Barbès in Carroll Gardens, and gigs at spots like the Brooklyn Museum, Nublu, and Zinc Bar already under their belts, THE MANDINGO AMBASSADORS are already on the NYC jazz map, representing Guinea expatriates from the Authenticité movement of the 60’s. This government-sponsored program fostered the growth of authentic Guinean music after the end of French colonial rule in 1958, while simultaneously exposing native Guinean musicians to the rhythms of Ghana, Cuba, and around the world.

This disc, recorded live at NYC’s WKCR, features 4 traditional songs and 3 originals. Mamady Kouyate is the lead guitarist and band head, with a long pedigree in the Guinean tradition, dating back to the 60’s. He led a number of major groups in his country and started a music school before turning critical of the government. As a result of certain protests he made, he was jailed a few times and forced to flee the country. On guitar, his sound is infectious, uncompromising, and non-stop.

Also featured on this album is the younger vocalist Ismael Kouyate, who until recently was featured in the Broadway musical Fela. On Radio NYC, his voice trills, yelps, mimics the flute, pulls away and rises above, and always pulses along with the rhythm section (which includes African and American players). This is serious West African dance music, if you buy this or check out this band live, get ready to move.