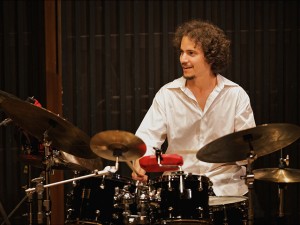 His arrival in the U.S. has been compared by to that of an asteroid hitting New York. Indeed, within a short period of time Dafnis Prieto’s revolutionary drumming techniques had a powerful impact on both the Latin and jazz music scene, locally and internationally. Having studied at the school of Fine Arts in Santa Clara as a youngster and later at the National School of Music in Havana, Prieto obtained a thorough classical education while broadening his knowledge of Afro-Cuban music, jazz and world music outside of the academy.
He first toured Europe with pianists Carlos Maza and Ramon Valle and the groundbreaking group “Columna B.” A resident of New York since only 1999, he has already played in bands led by Henry Threadgill, Steve Coleman, Eddie Palmieri, Chico and Arturo O’Farrill, Dave Samuels & The Caribbean Jazz Project, Jane Bunnett, D.D. Jackson, Edward Simon, Michel Camilo, Chucho Valdez, Claudia Acuña, Roy Hargrove, Don Byron, and Andrew Hill, among others.

As a composer , he has created music for dance, film, chamber ensembles, and most notably for his own bands, ranging from duets to his “Small Big Band” and including the distinctively different groups featured on his three acclaimed recordings as a leader, “About The Monks,” Dafnis Prieto “Absolute Quintet” and Dafnis Prieto Sextet “Taking the Soul for a Walk”. He has received new works commissions, grants, and fellowships from Chamber Music America, Jazz at Lincoln Center, East Carolina University, and Meet the Composer. Various awards include “Up & Coming Musician of the Year” by the Jazz Journalists Association in 2006, a Grammy Award Nomination for ”Absolute Quintet” as Best Latin Jazz Album, and a Latin Grammy Nomination for “Best New Artist” in 2007. He also composed the Title track for the Grammy Winner Album “Song for Chico” by Arturo O’Farril and the Afro Latin Jazz Orchestra in 2008.

Also a gifted educator, Prieto has conducted numerous master classes, clinics, and workshops. Since 2005, he has been a member of the NYU Music Faculty.

-Dafnis Prieto is easily the most impressive young drummer to come on the jazz scene during the past decade. Possessing awesome virtuosity and astonishing versatility, Prieto has made important contributions to the music of
a broad range of leaders… His compositions are elaborate composites melding Afro-Cuban rhythms and modern jazz harmonies into music that is ecstatic and intelligent.” − All About Jazz

-The essence of Mr. Prieto’s style is his collation of various Afro-Cuban percussion sounds − from old religious music to modern music − within one set of trap drums. His playing is infernally complicated, and infernally precise; the blizzard of accents he throws into any pattern have their place as surely as pixels in a computer image.” − The New York Times

-He is extraordinary, a rhythmic stimulus. He comprehends the two most incredibly difficult rhythmic genres −being Cuban and being an extremely talented jazz drummer.” − Eddie Palmieri