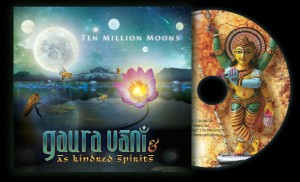 Before I continue with this review, I should say that, despite my love of Indian music, I am not much of a fan of Kirtan. Being as I am a Muslim, I do not participate in kirtans, and am considered something of a party pooper. For me, a little goes a very long way. So for me, a kirtan CD – and make no mistake, Ten Million Moons is a Kirtan CD – would have to possess qualities that stand out.

Vani and company’s work on this CD is quite good. They approach the genre of Kirtan in a manner that’s as imaginative as it is reverential.

The first track, “My Body is a Temple”, gives the CD a lively start. This is followed by a slower song; “Moods of Kirtan”, which features some nice sarod playing. “Stop and Talk” begins with vocals singing “bohl” over a western groove beat. “Mira’s Song” brings us beautiful female vocals, easing us into a  relaxed place. The title track follows, beginning with ambient sounds leading into a traditional Kirtan chant.

The most unexpected surprise is “Sleeping Soul”. The track shifts gears on us completely: here, in the middle of a kirtan CD, a gospel song begins, before easing into a fusion between gospel and Kirtan. “Surrender” further deviates from the traditional kirtan sound and feel, and ventures into a neo-folk rock structure; the only hint of the place it is coming from stylistically is the subtle presence of the bansurai flute.

“Where Was I Last Night?”, “The Pirate Song” return us to the more traditional Kirtan sound. “Worship the Golden Lord” begins with natural sounds of water, upon which the bansurai floats before being taken over by the vocals and tabla.

The final track, “Thunder and Lightning” also uses ambient, natural sounds. But it incorporates a string section with the presence of the sarod and bansurai.

Fans of kirtan, and devotees of the attendant religious beliefs will find this to be very well suited to their expectations; especially those with high standards. The casual listener will also find much of the music interesting, beautiful, well produced; and quite accessible.

Listening to tracks and buy CD