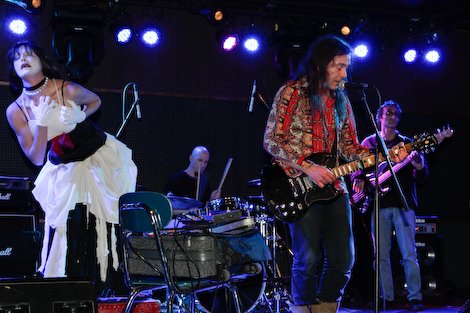 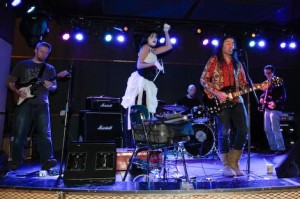 This night at the Knitting Factory was organized by Martin Bisi, pulling together four groups, Extra Life, Larkin Grimm, Martin Bisi and Human Wine. This is the new Knitting Factory, by the way, back in action in Williamsburg after the Tribeca Knit was closed to make way for yoga centers and pricey condos.

The feel of this evening, just after the celebration of the birth of Christ, and before the dawn of 2010, was Earth Mother folk (Grimm) meets burlesque punk (Martin Bisi), with a steam punk vibe thrown in by Boston’s Human Wine. I could only stay for Grimm and Bisi; these two played consecutively and were pretty different. 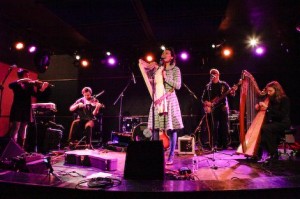 I checked out this gig to catch Martin Bisi, but was also surprised by Larkin Grimm’s sedate and refined folk songs, tempered with lush backing by harp, violin, keys and a surprise guest on bass – Tony Visconti, the renowned record producer of Iggy Pop, David Bowie (Heroes, Young Americans), T. Rex, and Morrissey. It was an interesting difference, Bisi took the stage with a dancer in tow and growled and mumbled and railed against the grain with his band, in art-punk style, but immediately preceding this, Grimm had been slowly working her own magic and had left a smooth, folky vibe that definitely remained in the air as the band ended their engagement. The clash of the two styles kept an edge to the night.

What’s more, when Larkin Grimm sings she opens wide one of the most expansive mouths I’ve ever seen, like she was 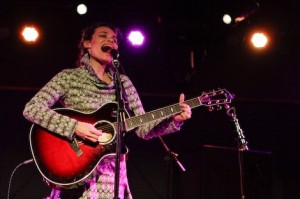 born to be up singing on a stage and could blow it away with a burst from her lungs. The voice coming out overwhelmed the space, but more by its sultry, mysterious way than its brute power. Her band, which she described as her “elves”, were also on point backing her throughout this night.

I couldn’t come across any other recordings from this evening, but one of the highlights that is available on YouTube is Grimm’s version of “The Burglar”, by the Sufi poet Hafiz (lyrics and video below). On this, she accompanies herself on guitar and sings mysteriously with slight Arabic waves in her tone, advising to “…smash the master’s door down and…..”

Now be courageous jump in his bed
Tear off his clothes and cut off his head
It’ll probably kill you but isn’t that great!
Isn’t that the point of it,
Isn’t that the original philosophy?”