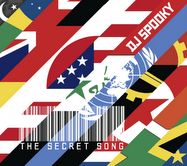 With The Secret Song, DJ Spooky is back, after a decade, with his first studio release under his own name. In this album, he’s found examining the themes of appropriation and collage across genres, cultures, and historical contexts, all by way of the art of turntablism, sampling and beat production.

In addition to the twenty songs that make up this collection, The Secret Song also comes with a DVD in which  DJ Spooky has scored and re-edited two early montage films, Kino Glas (Camera Eye) and Kino-Pravda (Camera Truth), by the Russian Dziga Vertov, who was an early pioneer of film after the Russian Revolution.

Vertov’s theory of “film truth”—that is, understanding film as fragments of actuality which, when organized together, have a deeper truth that cannot be seen with the naked eye—later influenced Cinéma Vérité. In this film re-mix, DJ Spooky connects the current state of hip-hop and electronica with early pioneers of technology, like Edison, Vertov, Burroughs, and Walter Benjamin, who envisioned an “electric” future, but were years ahead of their time.

Images from the 1920s come flashing on the DVD, set to postmodern beats, and we see in succession and repetition: the hands of a clock fast-forwarding and rewinding, a diver plunging from the high board, and then rising in reverse, a Chinese ring magician, a camera on the tracks recording a train’s approach, surely to terrorize the audience and send them running from the first theaters….

As a DJ working across genres, Spooky, a/k/a that Subliminal Kid, a/k/a Paul Miller, collaborates here musically with some of the best and brightest from the worlds of hip-hop, jazz and indie rock, and this undoubtedly is one key to this album, but DJ Spooky and his illbient methodology is the underlying force. He is helped by The Coup, who start it off with their “Five Million Ways To Kill A CEO”. Mike G of the Jungle Brothers appears on “Where I’m At”. Thurston Moore and Mike Ladd are together on “Known Unknowns”, with singer Sussan Deyhim on “Azadi (the New Complexity)”, Vijay Iyer on “Iago’s Lament”, and Mathew Shipp and the Post-Modern Jazz Quartet appearing on tracks as well. Peter Gordon, playing his electronic flute, also shines, particularly, on “Heliocentric”, a dubby drum and bass track.

Most notably, the DJ Spooky remixes of Led Zeppelin’s “Dazed and Confused” and “No Quarter” stand out on this album. Zeppelin were appropriators in the classical sense, and innovators on themes from early black artists like Willie Dixon and Robert Johnson. Here Spooky reclaims two of their famous songs, and shows what he can do with them. “Dazed and Confused” has long string interludes to approximate the psychedelic guitar histrionics, but the main riff falls flat in his retelling of this one. “No Quarter” survives better, with the original synth of John Paul Jones worked over with strings as well, and Bonham’s drumming morphed into a snappy jungle-beat pop. The main fault with these two is that almost 12 minutes of the album is devoted to grasping and reworking every note of these two songs. Here, he seems carried away by his theory, attempting to classicize what he’s doing and place it within the tradition of collage and appropriation. The thing is, the rest of this album proves he’s already there, and doesn’t need to force it with these tracks.

As a whole, this concept album dives deep and, as DJ Spooky is known to do, delves into the heady theory behind what’s going on with beat making, globalization, music theory, and culture, pointing out the inextricable connections with economic trends and suggesting that revolution is continual, historical, and unstoppable, not only between people and countries, but with technology and music as well. If this is not clearly spelled out, the implications of it all are blatant and pulsing throughout this album.