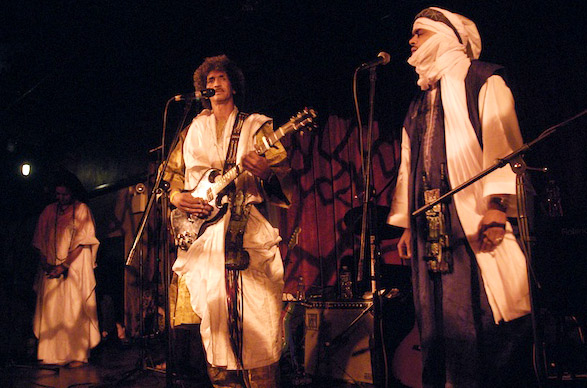 Tinariwen’s music, born in Tuareg refugee camps in Southern Algeria, is not bluesy, it is the blues. Their songs lament the loneliness of the desert, hardships in an armed rebellion and difficulties adjusting to a new world. 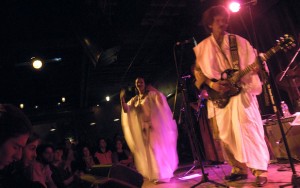 In the desert, flat and empty,
where nothing is given
My head is alert, awake
I have climbed up and climbed down
The mountains where I was born
I know in which caves the water is hidden
These worries are my friends
I’m always on familiar
terms with them and that
Gives birth to the stories of my life

Tinariwen’s concert at the Bell House was like going on a trance-like saunter through the Desert as we were exhorted by one of singers, “Welcome to the desert!” The beginning of the concert started slowly with acoustic guitar by Abdallah. 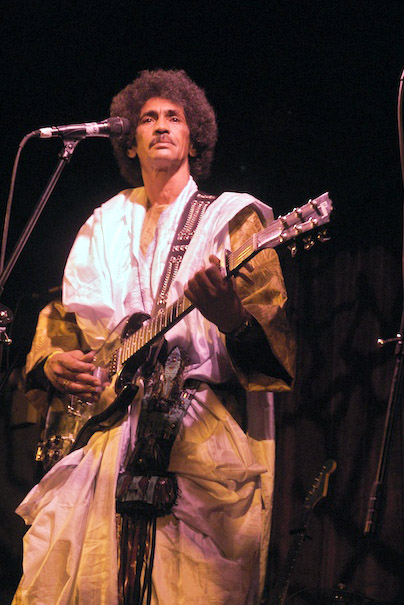 By the third song, the leader of the band and its star, Ibrahim, entered the stage and graced the crowd with some of his well-known electric guitar licks satisfying an expectant crowd. The depths of Ibrahim’s eyes and the creased quality to his skin confirmed his 30 year involvement with the band and all 50 years of his life living in and fighting for his desert homeland.

The concert touched all bits of their songbook playing some songs from their new album, but also doing their hits from their two previous albums. “Afours Afours” from the Radio Tisdas Sessions was a beautiful vehicle for Abdallah’s acoustic guitar playing and “Mataraden Anexan” a plaintive cry of a song. From their album Amassakoul, they played “Amassakoul ’n’ Tenere” and “Arawan” closing the show with a transfixing performance of  “Matadjem Yinmixan” from their latest album, Imidiwan which means friends, companions, soul brothers, fellow travellers. It was in these last few songs of the concert when the music and the vibe matched the myth. In the final minutes of the song the band was chanting “Tinariwen”. The crowd joined the chant creating an intimate connection between performers and audience.

At times, the stripped down vocals of the group turned into these chants reminiscent of early rap. Tinariwen has absorbed the best bits of American music like late 60’s jamming and late 70’s rap and synthesized these forms into their distinctly African beats and riffs. Listen to “Assouf” off of the latest album – the beat and guitar licks evoke the psychedelic guitar licks of Funkadelic with a slower almost trance like quality. Tinariwen’s new album, Imidiwan, was cut in their desert homelands with only generator power. Their music is influenced by the sounds of Rap and 60’s rock but operating with punk sensibilities. It tells a story about a rebellious group of people produced in an extremely DIY way. 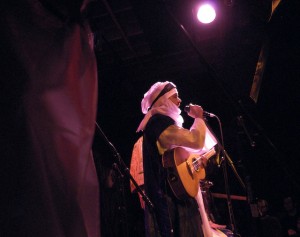 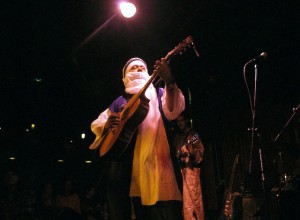 Recently, increased activity of a group called “Al Qaeda in the Islamic Maghreb” forced the world famous “Festival in the Desert” to move locations closer to a city. Knowing that Mali is historically Muslim, I asked if Islam played any part in Tinariwen’s music, Ibrahim answered, “not at all.” According the Andy Morgan, former manager of the band, the songs reflect Ibrahim’s experience with the whole spirit world, part of the pre-Islamic animist culture of the Tuaregs.

Ibrahim also said he could never write a song in French or English.  His language, Tamashek, is intrinsic to his creative process. Interestingly enough, the latest album had all the lyrics translated into English to help fans understand the beauty of the poetry and the meaning of the Tuareg struggle. For Ibrahim, letting the world know the story of the Tuaregs is his creative fuel. 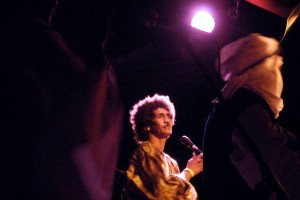 In his new life as an international rock performer, Ibrahim shares his music and experiences with people around the globe.  He says that this is of the most important facets of his life- meeting with people and sharing with them.  The following video from the Bell House performance shows this philosophy. The video shows the joy the band members have while playing one of their songs with the opening act, Fool’s Gold. At the end of the show, Fool’s Gold was brought onto the stage for a final encore with the entire band.

More about Tinariwen in DBDBD