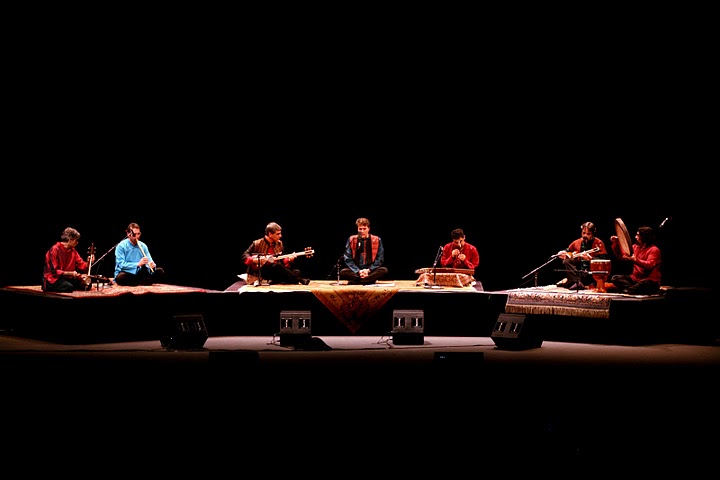 Worldwide, news about Iran’s volatile political climate is unavoidable, and any talk of its nuclear aspirations, Holocaust denials, and fiery rhetoric dealing with anything US-related sells lots of papers and stokes the flames of US patriotism. Its prime minister’s visit to Columbia University mobilizes protesters, and angers conservatives who believe and fear the “Axis of Evil”. Many Americans remember the hostage crisis under Carter and the 1979 Revolution as the beginning of troubling, recurring interruptions in the affairs of the US at the hands of varied groups of terrorists, culminating in, of course, the tragedy of 9-11, and continuing today with US military involvement in Iraq and Afghanistan. Few analyze deeply the source of all these conflicts.

Yet simultaneously a movie like Persepolis can come out and win awards and raise awareness all over the world of another real struggle taking place, showing the human face and universality of the people behind the news stories, the ones victim to the policies of their rulers; and then protests at election time in Iran bring the issue back to the front pages, and the killing of an innocent woman becomes a symbol for an evolving Green Movement for freedom.

What’s not spoken about as much is the music and accomplishments of this same culture that reaches back thousands of years. Recently, the Masters of Persian Music, musical ambassadors of Iran, were in NYC, and unfortunately, their arrival didn’t make the same headlines that other more controversial visitors might have. But for the Iranian expatriate community in NYC, these masters are a galvanizing force, a group that brings people together from all walks of life and offers a taste of Tehran, and the stirring of memories of a different time in their homeland. For others without a personal connection to Iran, the arrival of the Master Musicians of Persia in NYC was simply a chance to hear great music from a distant part of the world. 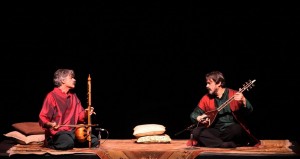 Led by Kayhan Kalhor and Hossein Alizadeh, the Masters of Persian Music appeared on February 18th at NYU’s Skirball Center, at the start of a tour that will take them to five other cities across the US. The two leaders took the stage and, after a dedication to a departed friend, sat next to each other on a set of hand-woven rugs and began an improvisation that would, over the next hour or so, rise and fall and peak in a furious build-up, evoking a range of moods with flashes of virtuosity.

Kalhor plays the kamancheh and Alizadeh tar and shourangiz. They were joined after the intermission by the other five players, which included Siamak Jahangiry on ney, Hamid Reza Maleki on santur, Fariborz Azizi on bass tar, Pezhham Akhavass on tombak and daf, and the singer Hamid Reza Nourbakhsh. Mixing instrumentals and solo pieces with the vocal numbers, the second half of the set lasted another hour and the vocalist Hamid Reza Nourbakhsh, of the younger generation, sat in the middle throughout, legs crossed, face serious and voice soaring, guided by the music and the words of poets on his lips.

It was impressive, but not surprising, that these players can come to NY and sell out a venue of a few thousand so easily. Kalhor and Alizadeh are well-known internationally for their work with Yo-Yo Ma and the Silk Road Project, and have worked at building artistic bridges with the West, playing such prestigious stages as Carnegie Hall and Lincoln Center, and collaborating with the likes of Francis Ford Coppola on his film Youth Without Youth, and Brooklyn Rider, a modern classical quartet. Live, they shifted and improvised lithely, even within the structures of the songs that they played from their CDs, and they built up a powerful mood that to the western ear brings a hint of austerity, a music not left to abandon, holding age-old impressions and something exotic in the switches of time signatures, drones and minor tones.

The Master Musicians played an encore to the enraptured crowd and remained seated and poised throughout the set. Their opinions on any current political situation remained unspoken, of course, as they are based out of Iran, and would have perhaps seemed out of place if aired from the stage. But a tension of some kind was in the air.

After the show, a cousin of one of the players went to the stage to wish him well and pass on a message from family. Groups of fans waited backstage, unusual at a classical performance no doubt, hoping to have a short conversation, take a picture, ask questions, or connect in whatever way to these leaders from their country. A young woman in hijab handed out literature for a rally of Iranian women in support of the Green Movement for freedom in Iran. In some ways, it looked as if something more might happen this night before it was over, some last conversation, possibly about the future, might be had.

The Master Musicians may not be willing to take on any role officially, but as musical ambassadors spreading the ancient rhythms of Persia and continuing traditions that existed long before the revolution of 1979, they connect the world today to a rich past and are a sympathetic face of Iran. They exist at a time of repression, showing the world another possibility and way that has been around for centuries before the current one of oppression that rules the day in some parts of the world. In fact, this was one of the most stirring things about this night, after the music: that these masters, older and younger, can keep alive a tradition and exist under any conditions, surviving and passing on the energy of generations past.