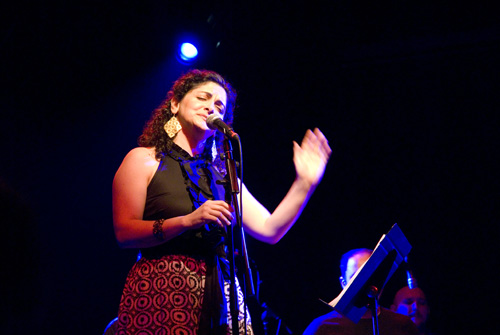 For Gaida, the music is all about “tarab” – the ecstasy one gets through feeling the power of poetry and music. “To reach the tarab, you are channeling the music through your body and soul,” says Gaida. “That’s how you know the singer and musicians are good- you feel the tarab.” In the Arabic language, the word for feeling is almost the same as the word for poetry, underlining the rapturous relationship these arts hold in Arabic culture. From the Middle Eastern culture centers of Cairo, Jerusalem, Beirut and Damascus comes a long history of “Matrubi” singing this traditional, yet ecstatic music.

Gaida’s music is a product of all her experiences of the culture of Damascus. Specifically, her song “Bint Il Balad” portrays a strong young woman who is rooted in her culture who knows all the smells, sights and sounds of her city. This girl will jump to help anybody in need – she is trustworthy, merciful and forthright. This girl can be taken as an analogy to Gaida herself, whose music is rooted in the call to prayer she heard every day in Damascus, Sufi singing and the traditional songs she sang with her mother and grandmother.

“Bint Il Balad” roughly translated as “girl of her city” also reflects Gaida’s view on women. She feels there are so many misconceptions about Arab or Muslim girls. She does not see the women she knows or grew up with portrayed in the media. “The media’s fantasy of Muslim women is what they portray. Muslim women are effective and strong members of the community.” Yet all she sees in the media are women in black hijab, niqab and burqa. She does not wear a headscarf, but she doesn’t sell herself as a sex object either. She is cleaving to a path as a modern singer without selling out her traditional ideals. 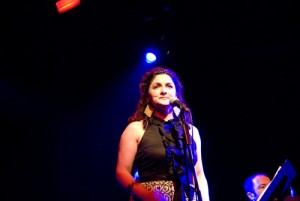 One could say that she comes from a tradition but that tradition is also looming over her. During the interview she mentions her father on many occasions saying that being a pop singer as sex object would be offensive to many parents. An engineer, her father did not initially support her desire to become a singer and instead insisted that she study science. At the concert, both her father and mother were listening over the phone from Kuwait. They plugged the phone into speakers and hosted a listening party despite it being 4:00am there. Gaida is in an interesting position of being this conservative person in an industry that rewards freaks. At times, her conservative nature held her performance back. She was at her best when she was engaging the audience and taking risks with her persona. Yes, her voice can make you feel the ecstasy of the music but I wanted her stage personality to take me there too.

However, having an additional career as a speech pathologist has allowed Gaida to remain an independent. She has no label and was able to produce her new CD on her own with the help of her family, specifically her brother who mixed and mastered her CD at his own recording studios, Oustaz Recordings. 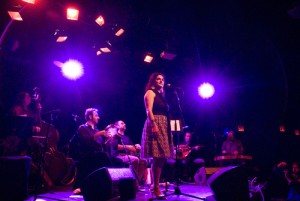 One of Gaida’s greatest achievements was the band that she assembled. On the stage there were from eight to nine musicians, all virtuosos in their own right, from piano, flamenco guitar, oud, trumpet, santur (dulcimer) and an array of Arabic music percussion instruments. The standout among this group was Amir El Safar who played both trumpet and santur and who was one of the primary architects of Gaida’s album. His sustained solos in both instruments electrified the crowd. It is not unusual for an Arabic musician to have such a large band, but it is unusual for a New York City concert. Gaida met and became friends with the players in her band over time while doing the circuits in the New York City Arabic music culture. Most of the performers from this night also appear on her CD. 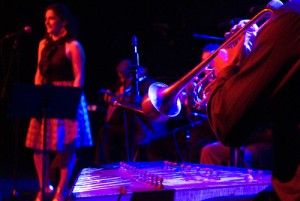 Many of the songs performed that night had a Latin flavor which primarily came from her original arrangement. However, one song, an old Lebanese song called “Ara Salam”, had the original arrangement intact. Gaida remarked that there is “a lot of things going on” in that song and true enough under the traditional Arab melody there was a Latin beat. Although not fond of the word fusion, she says she is all about bringing the Latin influence to bear on her Arabic music, of which the two influences are inseparable to her.

The best song of the evening was “Indulgences”, the title song of her new CD. Although one of the more traditional songs, the band made it into an improvisational piece where the santur, a dulcimer, had a prolonged jam and Gaida’s voice kept climbing higher and higher. I was wondering when her voice would reach the top of her vocal range when I realized that yes, I was feeling  the “tarab” too. I could do with a little more indulgences from Gaida when she allows her voice to be free and climb to those heights.