A Conversation with Ornette Coleman 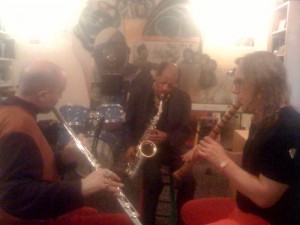 The winter of 1959 in New York was a time when the revolutionary concepts of Ornette Coleman turned jazz on its ear. The term avant-garde was no longer the exclusive property of painters, sculptors or experimental musicians with classical backgrounds like John Cage and Karlheinz Stockhausen.

Ornette, in his highly personalized mission to redefine beauty, had unleashed a strange new theory of music on the world he would dub “Harmolodics” (one part harmony/one part motion/one part melody) although his bleating tone on a white plastic alto sax was considered anything but beautiful by many.

While be-boppers before him like Charlie Parker and Dizzy Gillespie employed traditional song structures as the foundation for their expression and exploration, Ornette’s approach seemed to come straight from Planet X. The kind of freedom practiced and encouraged by members of Coleman’s quartet shook the very foundations of jazz at its core. Unless the listener was willing to approach the complexity of Ornette’s music with an unbiased mind and open ears, allowing the sound to wash over them without analysis, they would never grasp its full impact.

In retrospect it’s surprising that Coleman’s music caused such a maelstrom. Many of his compositions have an almost child-like, singsong quality while others reveal a West-Indian calypso feel. His drummers, Eddie Blackwell and Billy Higgins, always swung. In his unorthodox approach to group soloing (which had its roots in traditional New Orleans music) Ornette obviously had a new, fresh dimension of unified sound. Yet no matter how radical Harmolodics was, Coleman never completely abandoned changes that chords (if or whenever they were employed) implied.

Our conversation began with Coleman’s days at Atlantic with his great quartet and took off from there, quickly flitting from topic to topic, sometimes directly answering the question and other times providing surprising replies that seemed to dance along the edge of logic, where poetry lies.

JK: How did your relationship begin with Atlantic Records?

OC: John Lewis [of Modern Jazz Quartet] had a relationship with Nesuhi [Ertegun]. Nesuhi never asked me about anything musically or directed me. He just recorded the music. I made five or six records for them. I don’t like to bad mouth anybody but I didn’t make any money there.

JK: What about Columbia Records? Did they treat you any better?

OC: No. In jazz there’s not a lot of opportunity for success. The records were more like advertisements, to let people know what you were doing. It’s not really for making money.

JK: Your recent album, Sound Grammar features two bassists, Greg Cohen and Tony Falanga. The last time you played Carnegie Hall, you added a third bass player, Al McDowell [on electric bass guitar], to the group. Were you elaborating on an earlier concept that began with the Golden Circle concerts [Blue Note Records]?

OC: No. When someone wants to study with me and asks to play with me, I always let them. That’s why I’ve had most of the experiences I’ve had. I never hire any specific combination of instruments. When Pharaoh Sanders started playing, he played more ideas on his horn than anything else. Improvising is really about playing ideas, and ideas don’t have any parents. What is an idea but an idea? The idea can inspire or challenge. Sound is eternal but the name of the note is not the sound. It’s just a title, like my name.

JK: In Indian music there are rasas that convey emotions while the ragas, which contain very specific notes in the scale, are played at different times of day or night, during different seasons. Do you relate to that approach or system of thought?

OC: In Indian music everything just keeps getting clearer and clearer.  But I don’t think of it as a system. All systems, like rhythm and blues or be-bop, still use all the same notes. You have different grammar in sound and different grammar in language. Grammar is a mental idea that has less questions and no answers. Most people use systems to expand their image and make some coinage. They find a thing that hits and they package it.

All of your drummers [from Billy Higgins, Ed Blackwell to his son Denardo] have had an idiosyncratic approach toward rhythm. In one line-up of your band you added [tabla player] Badal Roy to your music.

OC: Badal plays fantastic. He plays like he’s talking. I have always wanted to have more rhythm. Rhythm doesn’t have any parents and doesn’t have a style neither. It just changes everything that touches it. You can’t dominate rhythm. Some call it the upbeat or downbeat but you either have to find a way to relate to it or let it pass.

JK: While Harmolodics allows musicians an incredible amount of freedom, it still has some boundaries, which are defined by your compositions.

OC: When I say harmolodic or sound grammar, I think about how many families speak the same language with the same meaning. They’re not saying anything different but they’re using different sounds to relate with each other. After all, what is sound?  It’s not air. It’s a sound! There’s no definition for it. It’s a force that you bump into and hear it. You can’t see it. You can’t destroy it. It destroys itself when it leaves. It’s the closest thing to what we believe in when we say god. Let’s put it this way – most people look for and try to relate to truth in their environment. So, the most true and advanced thing that I can think of is to open more eternity for humanity.

OC: That’s just the way it is! It’s obvious that nobody walking around made themselves. Not even my mother. The simple thing about being alive is that everything dies. And the only way you die is if something kills you. So basically we are invisible/visible.

JK: The Hindus say that when someone is born they “appear.” And when they die they “disappear.” So your birthday is regarded as the day of your appearance and when you die it’s remembered as the day that you disappeared.

JK: What comes to mind when you hear Don Cherry’s name?

OC: Don was a fantastic person. He played so fantastic. I don’t know what caused his health to fail.  When he got to New York he flew the coop.

JK: (NY Times music journalist and author) Robert Palmer took you to Jajouka (a small village in the Rif Mountains of Morocco) to play with the Master Musicians back in the early 1970’s. What do you recall about Bob and that experience?

OC: Oh, Robert Palmer was guided by the light. I really don’t know how he lived so long. He had so much love for what he believed.

JK: Nearly every time I’ve seen you play, part of the crowd walks out. It’s almost as if it wouldn’t be an Ornette Coleman concert if everybody understood the music. Years ago you said you thought the world had finally caught with you. Is that the case? Has the world caught up to you yet?

OC: Which world are you talking about? (Laughs) No one really knows what the quality of being human actually is. Music has a quality that no other sound actually has but it’s not always appreciated. For instance, the rhythm and sound of tap dancers (taps his feet in rhythm). It’s a lost art.

JK: I wanted to ask you about your violin playing…

JK: Are you left handed or was this a deliberate decision on your part to play the instrument differently from everyone else?

OC: I’m left handed, yes. In western music all the instruments have a tempered scale. They think that’s going to support everything in sound, which it’s not. The C is the violin, Bb is the trumpet, the bass is the F instrument and the reeds are in Eb. But the only reason you need a key is to lock your house when you go out. (Laughs)

[Parts of this interview appeared earlier in Rave India.]