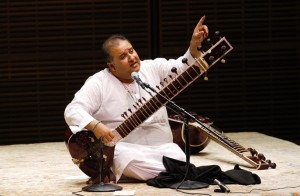 It was a warm spring evening in New York City when I went to Symphony Space to attend a concert by sitar master Ustad Shujaat Husain Khan.

The soon to be legendary Symphony Space was packed; the venue filled with a dignified sense of anticipation. I saw several people of my acquaintance. The audience for concerts of Indian classical music seems a community in itself. Many are Indians, Pakistanis, and Bengals. But you will find plenty of Americans and others who congregate in such places, bound by a love of this 4,000-year-old tradition and its music.

Ustad (maestro) Shujaat Hussain Khan is considered one of the greatest North Indian classical musicians of his generation. He belongs to the Imdad Khan gharana (lineage/school of thought in the Raga tradition) of the sitar; and is the seventh in the unbroken line from his family that has produced many musical masters, including master sitarist Ustad Vilayat Khan (who was also his teacher); his cousin Ustad Shaheed Parvez Khan; his grandfather, Ustad Inayat Khan; his great-grandfather, Ustad Imdad Khan; and his great-great-grandfather, Ustad Sahebdad Khan. His style, known as the gayaki ang, is imitative of the subtleties of the human voice. At the age of three Shujaat began practicing on a specially made small sitar, and by the time he was six started giving public performances. Since then he has performed at all the prestigious music festivals in India and has traveled around the world performing in Asia, Africa, North America and Europe. He has developed his own unique style; while at the same time retaining contact with his lineage. He is also known for his exceptional voice. He has over 60 releases on several labels; and also a very commercially successful video called Khandan. Additionally, he has earned several prestigious awards, and is a visiting professor of music at the Dartington School of Music in England, the University of Washington in Seattle, and the University of California at Los Angeles. 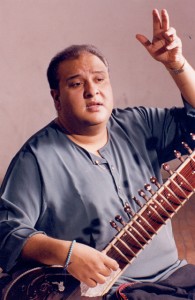 The stage at Symphony Space was spartan in its appearance for this concert. A slightly raised platform, covered with a rug, the tabla drums, and several microphones were all that were on the stage. Ustad Khan came to the stage, accompanied by two tabla players, and his assistants/students. One of the tabla players was Abhiman Kaushal, an accomplished tabla artist who has performed with Shaheed Parvez Khan, Lakshmi Shankar, Zakir Hussain, Viswa Mohan Bhatt and others. The second tabla player was never introduced. Judging from the fact that he took no solos and treated Kaushal with that special deference one treats a superior, it is safe to assume he was Kaushal’s student.

Ustad Khan’s sitar was the only non-percussion instrument in the performance. There was no tambura player (a drone instrument that provides a single note, octave, and fifth or fourth as a background to build the raga). This is unusual in a performance of classical Raga. Furthermore, the design of his sitar was lacking bass strings (unlike Ravi Shankar’s design, wherein he sought to incorporate elements of surbahar – bass sitar). This placed upon Ustad Khan an immense musical burden that he handled with ease and grace.

After tuning, Ustad Khan spoke to the audience. He mentioned, in his soft-spoken manner, that when he plays in New York City, he never knows what he will play. He was, it is clear, paying the audience a compliment; essentially saying that audiences here are too sophisticated to present anything basic or elementary.

He began with a composition based on an unusual variant of Raag Yaman, which he called Yamani. In Yaman, a sharp 4th is used. He inserted a natural 4th in the melodies, a feat which requires sensitivity and musical dexterity to add that note while still retaining the flavor and character of Yaman. His manner of exploring the contours of the raga was sensitive and serious, but at the same time there was a lighthearted playfulness to his improvisations. Never stopping, he played a composition by his grandfather, a piece that embodied the qualities of, as he put it, “innocence and simplicity.” His use of what the western ear would interpret as retardando, and an occasional flexibility in the tempo, is somewhat unusual in raga performances. Yet he takes this liberty with grace, and does not interfere with the mood of the raga.

Speaking of voice, Ustad Khan proved himself to be a marvelous singer. His voice is as lyrical and effortless as his sitar playing. Yet there is an undeniable confidence and power behind it. When he played a jhalla, his music did not so much as crackle like Ravi Shankar or drive with irresistible force like Shaheed Parvez Khan. His flowed like a river and the effect was more hypnotic than anything.

After a brief intermission, Ustad Khan returned and played a Sufi ghazal (love song) that, to my ears, seemed based on a variant of Raag Bilawal. At one point, he apologized for being unable to translate the lyrics for us. His manner was always relaxed, with a subtle humor. Ustad Khan’s approach is easily identifiable as part of the Imdad Khan gharana, yet his voice is unique. His work on the notoriously difficult to play sitar, and his vocals, show an obvious mastery. But what struck me was his unique style. One hears a real beauty in his music; and in doing so, he contributes to his lineage (rather than simple imitation) and performs a service to humanity.