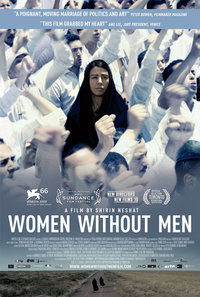 WOMEN WITHOUT MEN, an adaptation of Shahrnush Parsipur’s magic realist novel of the same name, is Iranian artist Shirin Neshat’s first feature length film. The story chronicles the intertwining lives of four Iranian women during the summer of 1953; a cataclysmic moment in Iranian history when an American led, British backed coup d’état brought down the democratically elected Prime Minister, Mohammad Mossadegh, and reinstalled the Shah to power. Over the course of several days four disparate women from Iranian society are brought together against the backdrop of political and social turmoil.

The visuals are as stunning as they ever were in Neshat’s video work. Martin Gschlacht’s camera offers perfectly framed, predominantly black and white images, interspersed with muted colors. The images of the magic forest as a safe retreat are highly suggestive. Dissolves often replace cuts, adding to the fluidity of the proceedings.

The Moroccan locations (Neshat is not allowed back into Iran) are powerfully atmospheric and Ryuichi Sakamoto’s moody soundtrack fully supports the image.