An incredibly promising and ambitious debut from a filmmaker who has made award-winning shorts, Women Without Men takes us to Iran in 1953, capturing the twilight of a lost secular society in all its beauty and ugliness. As the title suggests, the focus is on four female characters: politically engaged Munis, a 29-year-old whose abusive brother wants to marry her off at any cost; innocent Faezeh, who desires Munis’ brother but luckily escapes what she wishes for; elegant Fakhri, who leaves her husband the general to buy a magical orchard hoping for a new life; and the emaciated Zarin, a prostitute and symbol for the Iranian nation who also escapes to the orchard, but cannot be saved by its magic. 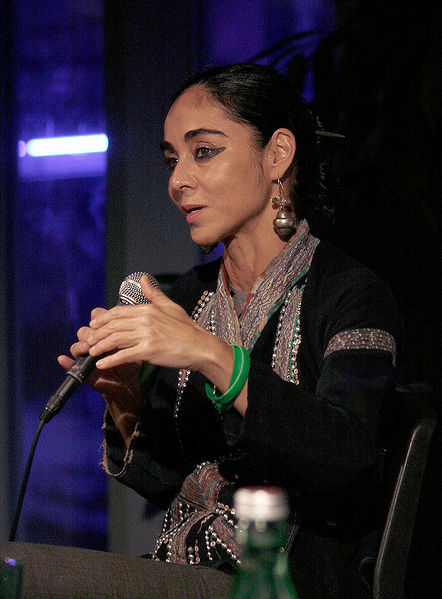 Shirin Neshat at an open discussion about her film Zanan bedun-e mardan (Women Without Men) during the Vienna International Film Festival 2009 (photo by Manfred Werner).

If these sketched stories sound both sad and sadly familiar, they are. Despite this, Women Without Men is decidedly worth watching, especially on the big screen. There are moments in which director Shirin Neshat, using Morocco as a stand-in for her native Iran, creates a world unlike any other, where the laws of physics and even the boundaries between life and death are shattered.

The color palette is tightly controlled, making the entire world of the film into a faded, hand-colored photograph. Space itself becomes elastic, stretching to infinity and then snapping back like a rubber band, particularly in the mysteriously edenic orchard, a version of the Persian pairi-daeza, a word for an enclosed space that became “paradise” after transliteration into Greek and Hebrew. This particular walled garden holds a stream, the liquid source of life that briefly brings the tortured Zarin back to herself, but its primeval mists sometimes lift to reveal a blazing sun that shines on a forbidding desert.

Certain images and emotional moments in the film are indelible: the eerily omniscient traveling shots into the archetypal orchard; Zarin’s painstaking (and painful) attempt to scrub away years of abuse in the public bathhouse; the perfectly framed road out of  Tehran, which seems biblical in its evocative simplicity; and the suspended flight and whispered awakening of Munis, who is the film’s most compelling but also most mysterious character.

These are images with the stark emotional heft of dreams, moments in which the ordinary is transformed into the sacred, and the textures of reality are pushed and stretched to form another realm, where ghosts walk alongside the living and gravity itself seems to reverse the path of bodies in its grasp.

As befits a film about this fantastic world, the soundscape of the film is strongly syncretic, blending an electronic score by Ryuichi Sakamoto with eerie sound design and traditional Persian songs. For this listener, the score felt like the most conventional of the three elements, but its conventions provide an emotional spine for our experience. Together with the sound design, Sakamoto’s score guides us effortlessly over the thresholds between the real and the fantastic that are so crucial to the film.

It’s the Persian songs performed by Abbas Bakhtiari, however, that steal the sonic show. And it’s no accident that these songs are sung for soldiers who’ve intruded on a party in the garden, spoiling its magic. Though the filmmaker chose not to subtitle the songs, their power is palpable. They represent the incredible force and strength of traditional culture in the face of armed interlopers.

The song performed by Fakhri (beautifully played by painter Arita Shahrzad) is the narrative’s emotional core: an elegiac performance that suggests both Fakhri’s mastery of this strange moment and her sadness at the simultaneous loss of a lover, a friend, and a country.

Filmmaker Shirin Neshat introduced a Sunday afternoon screening of the film at New York’s Lincoln Plaza Cinemas by warning the audience that hers is a “strange” film. I wish she’d trusted her audience and herself just a little more.

For all its pleasures, Women Without Men is like a seaplane, skimming the surface of a beautiful and terrifying landscape, but never quite taking flight. I wish the real had been grittier and that the fantastic had been stranger. One wonders, too, about the precise meaning of the temporal setting of 1953, the moment of the fall and reinstatement of the Shah following a British-led, U.S.-backed coup. Are the young communists persecuted in the film a stand-in for today’s Green Movement? Is this a time to be mourned for its lost secularism, or a time to be equally decried for the plight of its women? Without the additional statements Neshat has given in the many interviews about the film since its win at the Venice Film Festival, it would be hard to say.

Though Neshat calls her film an allegory (a tale in which one series of events and characters stand in for another set of events and characters), I found the film’s message opaque and illegible as allegory. Given the recent upheaval in Iran, and the rise of the Green Movement which Neshat has been involved in supporting, I’d hoped for a clearer correspondence. Instead, the director provides a collection of (admittedly alluring) archetypal images whose meaning is difficult to read as a coherent whole.

If, as I hope, Neshat’s next project is even stronger, film audiences have a lot to look forward to. For now, I’m happy to have visited this strange land unlike any other, and I’m holding on to my visa, hoping to return for an even more fantastic journey. 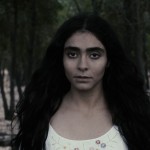 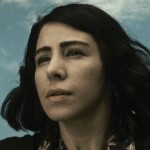 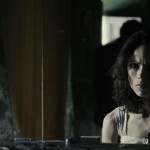 More about this movie in DBDBD.