Recently in New York City, listeners at places like The Stone and the Galapagos Art Space experienced a fresh wave of female artists passing through, artists that bring unique energy to their instruments and come ready to explore and expand on the vision they’ve formulated over time. The four women in action that are highlighted here are a sample of what you can encounter when you happen upon musicians that are definitely well along on their own artistic road, fighting to make a new sound, presenting a complete, challenging vision for your ears and eyes. 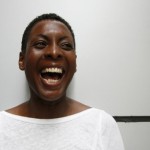 Helga Davis came out strong this night, earthy, proud, humorous, playing all originals that ranged from contemporary opera, to jazz, blues, gospel and ambient electronica. With short hair, she had the look and high-caliber vocals of a modern-day Nina Simone, and her experience with Burnt Sugar and the Arkestra Chamber, and Butch Morris were evident as she led her group through song after song effortlessly. She pulled audience members on stage, revved up the band on the jazzy numbers, and pulled it all back down when she wanted to let her vocals ring on the ballads. 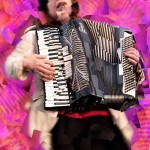 Imagine stomping on the steppes of Siberia with a female medicine woman, or a shaman on a hillside under the moon as tribal fires glow. If you had seen Amy Denio and closed your eyes during the set, you could have been transformed to one of those locales. Live, Denio jumps between sax and accordion, but it’s her vocals that dominate and shock, incorporating elements of Tibetan throat singing, Native American chanting, and yodeling. She also played a gutsy one-hour set (a bit longer than usual for this sort of thing), and led the audience through some call and response chanting that came together for some nice moments, impossible to do if she wasn’t an accomplished enough improviser. 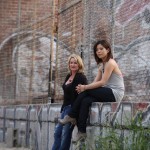 East met West this night, and then banged a hard left turn and went on to some other place altogether. Hay from LA, on an array of flutes and singing in tongues (like what a schizophrenic might whisper at night), and Honda from Japan, on classical and prepared piano, both have such an obvious and beautiful mastery of their instruments, and then can throw it all up in the air and go for these challenging improvisations, off in a realm of sounds, away from charts and composed moments to a fresh space. This night was never too aggressive or brash, and hit minimal segments where they let just enough silence and space creep in to the mix. Honda was the leader, playing an eclectic mix of her originals which the experienced Hay helped her balance out, and there were lots of soft, subtle moments of piano and flute mixed with the improvs, and Jason Mears adding a bit of flutter and skronk on saxophone.