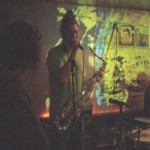 Dafna will perform a set of interrelated pieces building on work created during a residency at Diapason (Haas / Audio Chandelier), and work from the first Floating Points Festival and her years at Engine 27. She will also perform an excerpt of “Panda Half-Life”, her new new multi-channel vocal work written for the Magic Names vocal ensemble (American Composers Forum commission), which premiered June 2010.

Bora Yoon presents SPKR SPRKLE, a new work where sound is dynamically positioned and arranged to “shatter” and “sparkle” in stark sonic formations. Controlled through an x/y touch interface via Korg Kaoss pad, this custom controller and speaker system nimbly assigns and changes the directional formations of sound, making full dynamic use of proximity, tactility, and association to move beyond the two-speaker mindset. She will be joined by Luke DuBois’ unique video responses.. 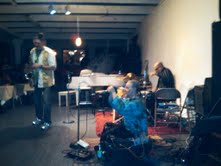 Much of the music that will be performed has never been performed or recorded. This concert is sponsored in part by www.theforgottenfoods.com, and http://churchinthewildwoods.com/.

More about Dawoud in DBDBD.

Deep Forest is a musical group consisting of two French musicians, Michel Sanchez and Eric Mouquet. They compose a new kind of world music, sometimes called ethnic electronica, mixing ethnic with electronic sounds and dance beats or chillout beats. Their sound has been described as an “ethno-introspective ambient world music.”

Konono N°1‘s “Congotronics” album introduced the world to the strange and spectacular electro-traditional mixtures which are being concocted in the suburbs of Kinshasa, Congo. World music, electronica and avant-rock aficionados have all been equally amazed by this otherworldly music, which has driven the international press to come up with some surprising comparisons (from Can and Krautrock to Jimi Hendrix, Lee Perry and proto-techno!…).

About the opening acts.