July 3, 2010 – Under a burning sun recently at NYC’s Central Park Summerstage, the top Turkish music stars turned out to celebrate the sounds of Istanbul and all of Anatolia, as thousands of fans, most of them Turkish, danced and sang along to their favorite songs. This day was labelled Istanbulive 2, a continuation of a new annual show at Central Park, and was marked by strong performances in the traditional, jazz, pop and rock veins. 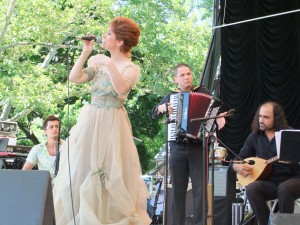 Starting it off, Emrah Kanısıcak (on saz, a traditional Turkish long neck lute) and Şükriye Tutkun (vocals) brought the deep ethnic feeling and expressed emotions through lilting minor notes that are the epitome of the Turkish sound. Amazingly, Tutkun, in a very formal party dress, and Kanisicak, in all black, managed to hit every note, and give their all on this blazing day, to the delight of Turkish fans in both traditional head scarves, with all their families together, and younger Turkish students sprawled out on picnic blankets, sipping beer and sweating behind dark sunglasses.

Next, Ilhan Erşahin, (known throughout the NYC underground for his club Nublu in Alphabet City), took the stage with his group Istanbul Sessions. A quartet featuring two percussionists, bass and sax, they connected traditional, Anatolian rhythms to a 60’s, Bitches Brew-era Miles Davis sound, all done with a pulse and athletic drive that mark their own style, and they were hot enough to get people dancing and swaying on this sweltering day, no easy feat. 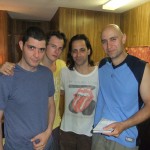 Duman, a rock band that mixes a grunge rock vibe with Turkish rhythms, followed, and they held the crowd for a solid hour, running through an all-Turkish repertoire of up-tempo alt. rock, nearing punk at times, and ballads, on which singer Kaan Tangöze’s deep baritone voice captured the crowd, who again, were singing along with almost every song. Duman, which means “smoke” in Turkish, were recently in the States for a short tour which brought them to Memphis and a few other spots, and they’re looking to expand to a more international audience, maybe do some songs in English on a new album, and tour outside their native Istanbul as much as possible in the future.

Finishing the show, Kenan Doğulu bounced and moved, performing his R & B hits, working the crowd up even more. He has been compared to Justin Timberlake and Jamiroquai and has competed in Eurovision (2007), since his debut back in 1993.

By the end of the afternoon, fans were blown away, rocked, and simultaneously reminded of their homeland or intitiated into an entirely specific, Turkish take on music across 4 different genres. For music lovers in New York, this kind of day is what the city is all about: happening upon a new style of music, taking a chance and coming away from a concert with a totally new perspective and appreciation for what’s going on elsewhere around the world.