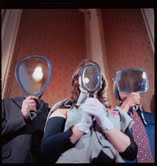 Anima Anonima light up the stage as a trio, ideally, or when their drummer isn’t available, they go it as a duo. What results is a barrage of creeping sonic exploration, mixing an array of effects, noisemakers, live vocals, delay, samples and live drumming with drop beats and jungle tangled together, to form cinematic rock-disco soundscapes that might find you dancing or zoning off, perhaps simultaneously. Embedded in the neighborhood of South Williamsburg for years, they can mix anything into a noisy beat and bounce it out to a crowd live, electronica with real multi-instrumentalists at the helm. Here’s what Heidi and Gus had to say about Hope St. in Brooklyn, MIDI machines, electroclash, sleeping with spiders, and possibly-poisonous Catholic convents…

Can you talk about the beginnings of Anima Anonima?

Heidi Sabertooth: Anima Anonima started out with Gus and me, I was doing a little bit of songwriting…

Gustavo Frias: And I was always working on beats, I came from a DJ background from LA, so I had a guitar of course, we got a rehearsal space, and Heidi joined, down on Hope St., down in the middle of the street, in the old Williamsburg, back before, you know.

Did you guys meet in that space?

H: We met 10 years ago, so we got the space together before the band, and then things slowly changed.

G: We actually met on a dance floor.

How about the drummer?

G: He’s been with us since 2007, for three years, we love him. We met him by putting out an ad, they work sometimes. We had a lot of wacky people come on, but it was ok, you know, and then when Tim came in, it was like, whoa.

H: We had a brief stint in a band called Grand Ultimate, that was prior to AA, or in the middle. But we’ve been AA for four years now.

How did the sound develop? I saw you a few shows ago, but the most recent one, at Glasslands, was incredibly stripped down, without drums. 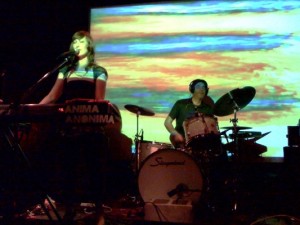 G: I think we focus on the dance element, especially with the beats that I have going on, and I’ve always had the idea of having live drums to go along with it, and go back and forth, luckily we’ve found a good drummer that can follow along. That’s how it started, and I don’t know how it would work at all, but we found Tim [Bulkley, drummer], and he’s our great friend.

H: As soon as he walked in the door, we all hit it off, I think we talked for a few hours the first time. And I really love how he comes from a jazz perspective, cuz I think it adds this other thing that we wouldn’t get from someone who was strictly rock. We’re not coming from a jazz perspective, a little bit of jazz and rock, and dance. It allows him to do a lot of different ballsy things, and not have to be feeling like, “I have to create the beat”, he flows with it.

How much improv is there? The other night, at your Glasslands Gallery show, it felt like I could follow the way you guys were building everything a little more, so how much of that is worked out, and how much done in the moment?

H: I think that’s the way we create. People come in with ideas, there are some structures of beats established, some songs and of course lyrics established, but I think our songs in whole are really created live in the studio, and have this magic that happens: you lose your mind a bit, lose space and time, and then you listen back. We record everything, we go back and say, “Wow that little 30-second part that was magic, yeah.” And that’s how we create the songs. That allows us to flow once onstage, because we’ve already practiced it. There’s going to be this ambient crazy noise coming from one of our machines and we just say, “Let’s go with it. Let’s roll it into another song”. Our songs are not about “Boom” we’re done with a song. “Boom” let’s start another song. “Hey guys how’s it going.” So I think that is a product of the studio..

How long has this been the studio? (note: AA practice in their basement studio that opens from a trap door in the kitchen floor at their apartment in South Williamsburg, where this interview was conducted.)

H: It’s probably been, oh, a long time now, ha, probably ’04 or ’05. I held down the fort; I said, “We have to move the studio in here”. It was just a cement basement space, bare walls, uneven, holes in the walls. I moved in first, and basically slept with spiders, and then we’ve been turning it into our studio ever since.

Any neighborhood issues, or complaints?

H: None! But we have no real close neighbors, it’s a warehouse, it used to be a knish factory. We play hard ‘til 4AM, we have parties in here. And now we have a garden in the back, we have peppers, it’s changed a little bit.

How was the Cameo Gallery show recently?

H: We felt good, like we had a good turnout. We opened up for Monuments and Infinity, and it was Infinity who got a Rolling Stone review recently, so there was a good crowd.

What else do you guys have coming up?

G: Right now we’re playing all new material, so we’re testing it out in the studio and live at our shows, so I think we’re very close to getting some really good live recordings off of it. So an EP is in the works.

H: We’re due for another release. Our Mechanic/Organic album was a place in time, a concept album, a little more moody. I think the stuff we’re playing now still has our signature vibe to it, ambient, but it’s tending to be more happy and energetic.

How many releases have you done?

G:Mechanic/Organic was our first real release, just last year about this time,

So we are due for an EP. We’ve had a good time. But I feel like we’re just coming into a good community of artists here in Williamsburg.

In Brooklyn, what other local bands have you played with that you’re into?

H: Well, we’re Williamsburg artists trying to push the envelope, and a lot of the stuff coming in to the area makes us feel like, “Yay, people!”

What you’re touching on is big, because that IS NY where all the new acts gravitate; it used to be the Village, but now it’s Williamsburg, or Bushwick, or wherever.

H: Yeah, we’ve been around for a decade plus, we see all that. I love this band Video Daughters, I fucking love their music, we’ve played a couple of times with this band Discovery, they have a really dynamic lead singer, kinda like disco, a party, they’re fun, mostly because the lead singer is out there, this girl.

G: With a very sultry, raspy voice, we saw them once with a trumpet player.

What about getting out of town, do you do any touring?

Never? Or you have, just not a lot?

G: We haven’t, just to New Jersey a couple of times.

H: It is pretty close, ha. It is hard to do, but we aspire to do that. I feel like people are coming out locally, so that’s great, there’s a million places to play.

G: Yeah, I think that’s kinda what we decided to do this year, throw our own shows and have an artistic angle to it, rather than just playing on a roster of bands that we don’t match up with.

H: And maybe the EP will inspire us to be like, “Yes, we have an EP coming out, we’ll take a regional tour.”