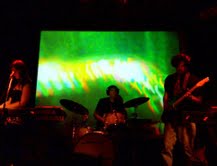 If you can make it happen that’s really good. Just a quick shot to Japan, a quick run to Europe, you know…..

H: There are enough bands around here doing that, yeah.

As far as bands that came along doing the electroclash thing, do you remember bands like Avenue D, Fur Cups For Teeth, and Le Tigre, of course? Are there any of the other electro bands you were into?

H: I want to say there was a formative YEAR of electroclash, and then, you know so many other bands doing the same thing, so…

G: Hearing that stuff for the first time, I remember thinking it was really cool, but I don’t know a lot of different ways they can represent it, it was always the same 4/4 beat, the same sound and tones in the singing.

H: Now that I really think about it, I see us as probably reacting to that because we always were into the dance culture, that was super duper formative for both of us. And electroclash coming out of that. But we never wanted to be that IDM guy like, “I only have my computer up here”. That explains why we have these crazy boards with lots of pedals, and I love to experiment with real machines, real sounds, even our machines have real tubes in ’em. We always wanted that, and felt it was very cold and weird to have all your machines MIDI-ed up. It’s very weird. I think that’s probably where we get a lot of our sound, it’s always been a product of all our experimentation, we’ve always had feedback and guitars and synthesizers and everything and asked, you know, “What are the possibilities of sound?”

Let’s get into that a little. As far as effects and pedals, were you both into it independently, or did you grow into it together? You’ve probably played guitar forever? (to Gus)

G: No, actually. I didn’t play an instrument ‘til I came to NY, and the first thing I picked up was a shitty acoustic guitar.

H: You’ve gotta start on that! And then suddenly when you get a great guitar, you’ve like, “I’m a genius!”

Did coming to guitar later change your approach to how you made music?

G: Totally! I keep it as simple as possible, it’s just all about texture. When we all play together, it’s just about adding one sound here and there. Even our drummer will play a cymbal sound and it gets all ambient.

H: Let’s just be honest, every time I get a new pedal, it gets reappropriated to your electric guitar. This is what happens every time! I’m up there searching to buy pedals, to make my vocals awesome, with crazy, robotic sounds or whatever. Eventually it gets incorporated into his pedal board, which is great…

At least you agree about it!

H: I totally agree!, I’m like no, it’s better like that, every time. Right now I think I like the Korg vocoder, so I’m using that a little more. And I have a Line 6 sampler.

H: We’re really ready to put something out because I think that we were always so focused, every time we went down in the studio, on the new experience, you know the newness of a pedal. It took a little bit for us to be like, we want to have an album, out.

G: But I’m glad we went through that because I really think it made a difference in our performances now, that we could go on with this or that, do so much more.

Did you have your first show right away or did you wait a long time? Both ways are pretty interesting, I think.

G: Absolutely, I give credit to a lot of bands that get together and immediately start performing. No, we waited. I think we were trying to figure out what we were going to take to the shows. We built this studio setup where everything was included and finally we had to start checking things off, cutting things out.

When you play a little more stripped down, how does that change it up, do you play the same songs or different ones?

G: A little bit of both, it all depends on the sound we get through our amps, what we bring out.

H: We also did a stripped-down set at this old convent recently, an art happening at St. Cecilia’s Convent in Brooklyn, organized by Zero Day Exploits. They set up mixed media events, video and music. It did get broken up by the cops, twice during our performance, but, it went on. It used to be a convent, but now it’s unused. It was pretty crazy.

G: There was a father.

H: Yes, a priest was there. He was participating, it was bizarre, but there were drinks, general revelry. Like a regular show, just in a convent! It was really fun. You know, we might have inhaled some lead paint, but the surroundings were beautiful, it was in the day, I feel lucky enough that we were there in that one part of Greenpoint where it connects with the Italian part of Williamsburg.