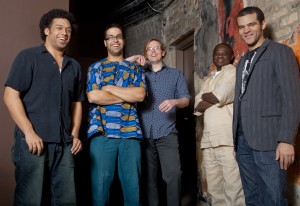 Although the Occidental Brothers have been making a name for themselves for their revival of the African Highlife style of music that they play based out of Chicago, at this NYC show at Le Poisson Rouge, they featured Congolese legend Samba Mapangala. This mix allows the band to pay tribute to the classics of Ghana and West Africa while at the same time adding their own stamp on the genre with originals and instrumentals. Whichever they do, the African pulse and the Highlife guitar runs are all there and it’s hard to sit still or resist the urge to dance once they get started.

That’s one reason it was a shame that Le Poisson Rouge had the tables set up for this night. Although the room was bathed in beautiful reds and greens and candlelit, without the space to move around up front, it was impossible for this to turn into a full-on celebration. Nonetheless, the band was on point, and Makaya McCraven on drums was a driving, progressive force throughout the night, keeping the beat, building up a swell and dropping out in traditional style. Bassist Joshua Ramos played hypnotically at times, and looser, jazzier when the rhythm pulled him out further. Greg Ward on alto sax seemed a bit low in the mix, and could have been more experimental with his solos.

Without a doubt, leader Nathaniel Braddock on guitar (who instructs at Chicago’s Old Town School of Folk Music and has been featured in Guitar Player Magazine), stays true to the roots of this African music and floats aloft when soloing with twinkling trills and runs in an authentic Highlife style. When done, he effortlessly slips back into rhythm in time to back singer Mapangala, and joined by second guitarist, Antonio Carella, keeps the pulse flowing on .

In fact, this is an inspired collaboration, the African legend playing with a younger, diverse, American backing band, that nonetheless can do it all in the traditional style. The band’s original instrumentals were strong too, and it seemed like they could be even more unrestrained and slightly less overly-respectful when backing Mapangala.

This band, in this incarnation, has been working together since ’09, and will have a new album out in ’11 documenting this unique Highlife revival. They will only increase their already critically-acclaimed reputation if they manage to capture all the best of the elements that they’re now mixing together. Look for it!