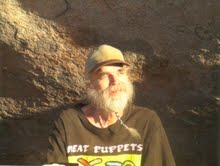 I got this news two days ago from Tony Mann who was a friend of his. He visited him a couple of months ago in Joshua Tree, California, and took this picture. It is the last photo of Williams.

He was a  punk and hardcore producer, guitarist and songwriter. He co-founded North Carolina’s punk band, Th’ Cigaretz (with Byron McCay on guitar and  Scott Jarvis on drums)  in 1977.  Th’ Cigaretz moved to New York in May 1979, and released their only album Crawl Rite Outta My Skin on their own label Cancer Records. The group disbanded in 1981.

Williams eventually became a producer of various bands, such as  Washington, DC’s Bad Brains (recording and producing their first album for ROIR which was released in 1982), the Beastie Boys (with whom he also toured), 3 Teens Kill 4, the Young and the Useless, Reagan Youth, and Velvet Monkeys. He also continued to perform as a guitaris for bands, such as Bloodclot, the Hi Sheriffs of Blue, Purple Geezus and Workdogs. Later he was a founding member and organist for the performance-support group the Church of the Little Green Man. And he was also the soundman at NY’s CBGBs during the NY hardcore scene.

In 1999 Williams moved to San Francisco, and since 2001 lived in Yucca Valley, where his health began to fail due to a liver ailment.