Text and photos by Jim Hoey 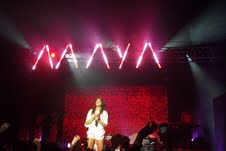 At Terminal 5 on Sept. 27th, M.I.A., aka Mathangi “Maya” Arulpragasam,  came on to the stage draped in dark robes, glasses over her eyes, dancers at her side, namely Cisco and White Boi, and a trio of shuffling burka-clad crew attendants over on the right, like maddened under sharia law, popping off lines from the new album, singing “The Message” before rolling into “Galang”.

This night was rainy, and in the beginning there were rumors from the web about electrical shortages and generators being brought in and delays, but for a Monday, it was just business as usual and Terminal 5 acquired the generators to make it work, so instead of a concert starting at 7, it kicked off at 8:30, and that was fine. By the last chorus of “Galang”, which veers suddenly and ironically from the main rhyme into, “ya ya HEY wo wo eh oy oh eh, ya ya yey” (repeat), any earlier stress was completely evaporated.

Actually, there’s no way to underestimate M.I.A.‘s energy and power coming onto the stage, it was full-on, especially after Rye Rye (from Baltimore) left the stage in a twirl of dancers and half audible vocals. After waiting through a really good set by DJ Asma, it was electric from the first beat. M.I.A. made her way to the spotlight and then held the mic and the crowd for the next 40 minutes.

“Bamboo Banga” came next, with the “Roadrunner, roadrunner” intro right from punk icon Jonathan Richman and the Modern Lovers quickly morphing to the M.I.A. twist of :

“Tamale in Ghana, Ghana, Ghana (hey!)
India, Sri Lanka, Burma, bamboo banga (hey!)
And we’re hittin our records like a tennis player
And the drummers do the shit like the macarena
This the jungle banga
Or the cold jammer”

When the bass hit after these lines live it was massive, and the crowd surged, bombing the stage, and it was off the hook from there on in, “M.I.A coming back with POWER” taking on new meaning after the outages from the storm. Next came “Born Free”:

Later she bounced into “Lovealot”, a new track of Maya which particularly demonstrates her familiarity with the third world and the west, and her ability to get to the core complexities underlying the post-colonial world and terrorism:

“Like a Taliban trucker eatin’ boiled-up yucca,
Get my eyes down like I’m in a black burka,
Been through shit, yeah it’s a fucka’,
But now I make tunes, say shuck-a-lucka-lucka.

Like a hand me down sucker throwin bombs at mecca
call the good world, get money to get better
keep your head down like a unicef worker
if you get hit you cant question the fucker..
I fight the ones that fight me
I really love a lot I really love a lot”

An acappela version of the dubby “It Takes A Muscle” followed, and with it came a costume switch, from black robe down to a T–shirt that stated, “Fuck Google, Ask Me”, and then a bit later, all the way down to a white silk short-sleeve shirt and matching shorts. She rocked away through all these guises and built it up for the finale of “Paper Planes”, for which she grabbed people from the audience and pulled them up on stage where everyone got wild, all the dancers came out at once, as well as Rye Rye and her crew, and with the crowd singing along to every word, M.I.A. banged through the last song of the night. 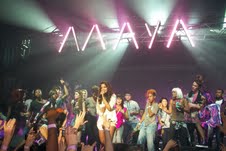 A tight set, at 40 minutes or so, I felt it could have lasted longer, and I wanted to see the crowd hang around to force an
encore, but it wouldn’t happen. As soon as the lights went on, kids rushed out, probably to tweet and throw images up on Facebook and Youtube.

Or maybe they knew that as payback for her rained out set on Governor’s Island during the Hard NY festival in July, she’s going to be doing a free show at the Brooklyn Bowl next Wednesday October 6th. Line starts at 7:00PM, but I have a feeling that people, probably half the crowd from Terminal 5, will be there earlier, waiting it out, even in rain, if necessary, to soak up some of the energy pumping out from M.I.A.

This is a video taken by Jim himself!