The Japanese shamisen in the west has a number of images associated with it: the delicately robed geisha entering a quiet chamber, seating herself before the patron, and setting the instrument gently on her body, plucking strings with the bachi (plectrum, or pick) and singing before moving on to other diversions; there’s also the image of the blind shamisen player in black and white films playing for money on a doorstep or in a Yakitori-ya (a tiny Japanese restaurant specializing in yakitori, or skewered grilled chicken meat) with yakuza nearby harassing them or while the manic, soft, or melodic strains of the instrument ring out as background music and the patrons grow wild with drink, passion and despondency before succumbing to oblivion.

The Yoshida Brothers (in Japanese: Yoshida Kyodai) of Noboribetsu, Hokkaido shatter both of these older pictures with their modern interpretation of the Tsugaru shamisen tradition, treading an often fine line between progressing the age-old art into the new century, and holding true to the core methods of the Tsugaru Shamisen that purists desire and demand. Live, they attract younger crowds by their flash and guitar-like ability to riff. But they sit with bent backs, open mouths and with legs too far apart for some who are familiar with the traditional players of Japan from the older generations. The same facial expressions and movement that might snag a wild-eyed foreigner or first-time listener at the same time might put off the purist who has not been reared on as much MTV, Internet, and video games. 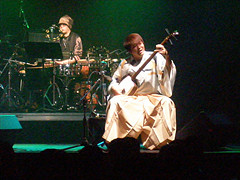 Recently at the Highline Ballroom all of these elements were on display. The Brothers (real brothers: Ryoichiro, born 1977, and Kenichi, born 1979) have been a breakthrough act for this folk tradition internationally, and in the past eleven years since their debut in 1999 have undeniably done more for Japanese folk music and the shamisen than many other players in this tradition. Their trademark, of course, is their youthful attack and soulful dexterity, which can sound more mature than their years would allow, yet simultaneously their willingness to blend the folk sounds with electric guitars, bass,drums, and DJ production, obviously take this ancient genre to new realms.

Speaking of the show: two sets. Playing in following formations: solo shamisen, duo shamisen, two shamisens plus percussion and one shamisen plus percussion. Their song repertoire was a mix of traditional and modern interpreted Tsugaru shamisen songs. In some of the songs they were joined by the Japanese percussionist Ippiki. Both brothers competed with each other with one long solo (Ryoichiro, the elder brother, felt he was the winner of the two.) They tried to communicate with the audience by introducing themselves in broken, “cute” English and joking about each other (something a traditional Tsugaru shamisen player would never do).

With regards to Ippiki, the percussionist, he played all kinds of instruments, such as Japanese taiko, djembe, congas and made ambient electronic sounds. His playing was perfectly tuned to the shamisens, playing in perfect unison and on time with the brothers and he used electronics very effectively and minimalistically. He played one long solo. His stage outfit was unorthodox for Japanese folk music fashion taste: he wore sunglasses, and a kind of Kosak hat, hip hop style of dress, necklace, etc. (check the video for the visuals.)

And this night it seemed like the Japanese crowds were there, making up the majority, expecting an epic demonstration of the Tsugaru Shamisen music. But it seemed like many who may have been familiar with this traditional music style were waiting for the magic that comes from the notes not played, but from the space left, those used to hearing the shamisen played less percussively, and less like a guitar, in the real eastern fashion. Some of those fans, the real purists, may have had a little problem with the music of the night, with the concessions to the west, and the flash that seemed to be imported onto the instrument.

So, as crossover stars, there are major questions about what the Yoshida Brothers have compromised, or not yet gained from experience, while coming up along the way. When compared to the blind master Takahashi Chikuzan, who played door-to-door in his early years before WWII, they may lack a certain depth, opting for space-filling runs and rhythmic blasts over the more profound combination of notes and space that may strike the hearts of more purist listeners. Yet they stand as critical favorites bringing classic art to untold numbers of new fans who’ve never heard these rhythms before. At not yet 35, it’s also hard to hold these artists to such a tough standard, demanding them to be masters and not a part of the times they come from. But what could be incredible is the slow maturation, development and continued excellence that would bring all of their best elements out live, and surely that is somethhing that can be expected.

Watch this video in which Americans are playing the Tsugaru shamisen!!