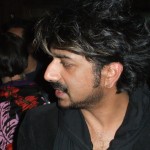 Herman Hesse once wrote that hell is to be found where two cultures and ages overlap. There is some truth to this, because it forced those on both sides to acknowledge the existence of the non-self. But at the same time, that overlap is the beginning of a new culture, and a new age.

Talvin Singh is a prime example of this phenomenon. I had the opportunity to witness this first hand on Thursday, October 7th at the Highland Ballroom in New York City.

Embarrassing as it is for me to admit, I am in many ways very “old school.” The whole idea of “DJ Culture” was a little difficult for me to swallow, and many DJs bore me to tears. I mostly view it in terms of anthropology than as in real art – with a healthy number of very intriguing exceptions. Talvin Singh is such an exception.

Born in London, and exposed to Hip Hop and Punk, he studied tabla with Pandit Lashman Singh. In spite of this classical training, his western influences prevented him from being accepted in the classical Indian music world. Soon, he decided to turn toward the fusion of sounds and styles, and  eventually worked as a musician with such as Madonna, Siouxsie and the Banshees, the Indigo Girls, David Sylvian, Sun Ra, Stress (Neo-Psychedelic band), Björk,  Massive Attack, Blondie, DJ Spooky, and Bashir Attar. Singh also founded the Anokha club night with Sweety Kapoor at East London’s Blue Note. He began to use amplified tabla and percussion and performed with drum & bass DJs and South Asian punk bands; and worked as a remixer until releasing his solo debut, OK in 1999.

Singh’s set-up was interesting: amplified tablas and electronic percussion on a stand (he didn’t sit in the classical manner), a Mac, and an assortment of other devices. Video projections, the work of a VJ artist, appeared behind him.

His first piece began with a classic teental rhythm on tablas, woven into live-looped samples, and sounds from his Mac manipulated in real time. His tabla playing was marvelous; very well disciplined technique and powers of expression. Yet it is obvious to the trained ear that he did not play classical Indian tals exclusively. He brought the tabla into a new world, and brought that world into exposure to an Eastern mindset. At times, his bayan (larger, bass drum of the pair of tabla drums) would be on the verge of feedback; yet I found myself wondering if this was a deliberate effect.

His manipulation of sounds in real time displayed an almost jazz-like sense of improvisation. His ability to create colorful atmospheres and dense rhythmic tapestries with the sounds, loops, and samples at hand, was truly enthralling. It is the mark of a true artist who can transform a machine or collections of machines (like a computer or a recording studio) into a musical instrument. 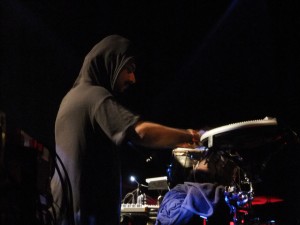 And his improvisation had a sense of “danger.” He was not afraid to take chances. I share the late jazz drum virtuoso Tony Williams’ distrust of musicians who make no mistakes; because it means they are not trying, they are not reaching beyond their own limits. Singh did make a few mistakes; and it was clear he did so because he was in the throes of improvisational creativity. And he mentioned to the audience, and later to me when I had the pleasure to meet him, that several people throughout the world were hooked up to his Skype account and were listening to his concert!

Creative DJs and sound artists are paving the way for a great quantum leap into a much-needed realm of musical expression.  This incorporates the harnessing of a historically new and unprecedented factor of digital technology in a way that serves art, and not corporate needs and agendas. We are at the beginning of the era that will make use of this technology, and take it to the heights that people like Richard Wagner or Duke Ellington took the orchestra. Talvin Singh is clearly among those forerunners.