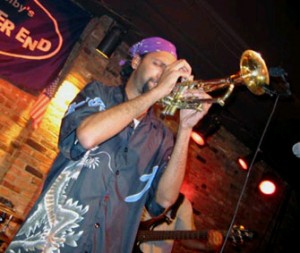 Fortunately, due to the delay of the show, Satish and I had enough time to talk and to get to know each other. Later, when listening  to his trumpet playing, I felt that Satish could be a very interesting voice and contributor in my band, The Tehran-Dakar Brothers.

In 1996 Satish gave up a budding career in biology for another budding career, in music, and moved to New York City with little more than a trumpet in his hands and jazz in his ears. Four years later he started a pioneering  jazz/funk/Indian classical fusion band called Indofunk, which showcased his unique valve/slide trumpet, the Firebird, running through multiple guitar effects pedals.
Indofunk enjoyed a great deal of success in the early 2000s. In the years since he dissolved Indofunk, Satish has been active as a sideman with groups ranging from rock to funk to electronica. He presently co-leads two duos; one, with an  acoustic guitar player, is heavily Indian-oriented, and the other, featuring a laptop player, is completely electronic.”

What is the FIREBIRD?

Satish addresses many of the questions and inquiries he’s received about his unique trumpet, the Firebird, in this video multipart series. In this first episode, he introduces the horn, demonstrates how it works, and gives some history and background on the instrument.

In this second episode, he starts to explain how he uses it in an Indian classical context, plays some examples of typical Indian ornaments, then pauses to allow the audience to read up on and listen to some examples.

And here is an Indofunk video at the Bitter End (NY) playing the FIREBIRD.