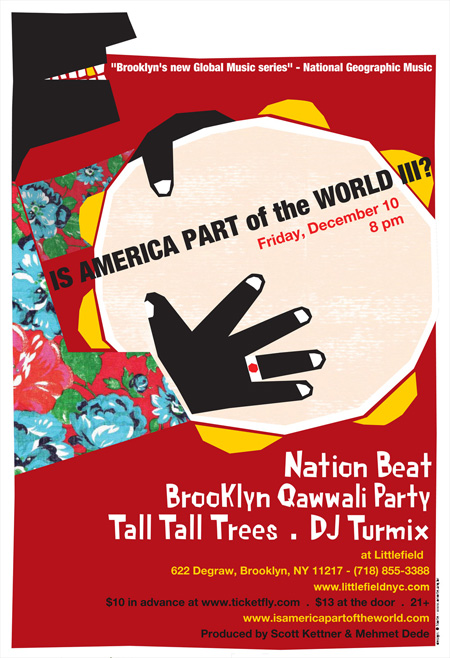 Date: Friday, December 10, 2010
Time: 8pm
Venue: Littlefield  (622 Degraw, Brooklyn, NY 11217, 718-855-3388)
Tickets: $10 adv tickets available at http://www.ticketfly.com, $13 at the door, 21+ w/ ID
“IS AMERICA PART OF THE WORLD?” – Continues with Third Installment at Littlefield
Four American-rooted, genre-defying acts look beyond America’s borders for inspiration and world beats
New York, NY – Nation Beat drummer/bandleader Scott Kettner and event producer Mehmet Dede have always challenged the notion of “world” music through the shows they put on. The duo launched a series of events in 2009 to foster a platform of discussion and bring together bands, who blurred the lines of world music while moving hips.
The series, “Is America part of the World?”, was described by National Geographic Music as “Brooklyn’s new Global Music series” and garnered attention online and in print. Brooklyn Courier-Life noted that “the concert isn’t so much a question, as a statement to the conventions that define the world music category,” and The Lucid Culture blog raved about the “impressively energized crowd” at its events.
After two successful concerts at the Bell House and the BKLYN Yard the event now moves to another Brooklyn hotspot, Littefields. In the past year, the series hosted such venerable artists as Forró in the Dark, Rupa & The April Fishes, Red Baraat and DJ Nickodemus. On December 10th, four more acts will present an eclectic night of dance, beats and sounds of the East, West, North & South. Nation Beat serve their Brazilian Carnival-meets-New Orleans Mardi Gras cocktail, while eleven-piece eclectic jazz orchestra Brooklyn Qawwali Party bring out the thunderous Qawwali songs and Tall Tall Trees hold it down with their banjo-driven folk rock for fans of indie rock and world music alike. One of New York’s finest mixocologist DJ Turmix  provides the funky Soul, Brazilian, Nu-jazz, Breaks and Boogaloo tunes. Join us on this joyous holiday celebration and our last party of the year.
Videos of the bands: www.isamericapartoftheworld.com
———————————————————————————————————————————–