Text and photos by Jeff Greene

Late last year, there was an article on the front page of The NY Times about the planned demolition of large sections of the ancient silk road city, Kashgar, in western China.  I decided I should go before it was gone.  An Uzbek friend had invited me to his arranged wedding in Samarkand, and I figured that was all the excuse I needed to go to Central Asia. 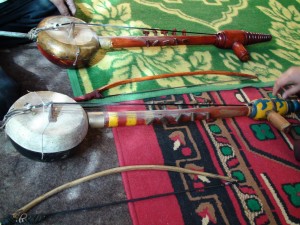 I have been interested in the music and culture of central Asia for decades.  One of the types of music which I found fascinating was the Dolan  Maqam  of the Uighurs ( it is pronounced /ˈwiːɡər/ by English speakers), a Muslim minority in Chinese Turkistan.  While most music in central Asia is homophonic where an ensemble might follow a single melody line, the Dolan Maqam is polyphonic, with each instrument playing a different melody or rhythmic line.  This has led to it being compared to New Orleans Jazz and even being called Chinese Desert jazz.  The Dolan instruments are very unique and generally consist of a Dolan rewap, a plucked skinfaced lute with multiple sympathetic strings; a Dolan geychek, a bowed horsehair spike fiddle with sympathetic strings; and a qalun which is a type of zither which is plucked with one hand while the other slides a metal key over the strings to create wild glissando effects.  These are complemented by several frame drums which bang out rocking rhythms while the entire ensemble sings at the top of their lungs.  The energy is huge.  The Dolan maqam form usually consists of set pieces or suites of compositions, starting with a free meter introduction then progressing through several rhythm changes to the conclusion.

The timing of my trip to western China was far from ideal, as it followed the Urumqi riots by only several months and coincided with the end of Ramadan.  I felt fortunate that I got my visa, and at the Chinese embassy, where I was questioned closely about why I wanted to go to Xinjiang in the first place.  I simply answered “to hear the music.”  Since the riots, all of the internet service had been shut down by the government, so I was not able to make any advance arrangements. Within an hour of arriving in Kashgar I found a tourist café where I inquired about finding a guide to take me into the Taklimakan desert to find a Meshrap or some dolan music.  “Bad times, oh very rare now, too difficult” – I was told.  An hour later I got a call telling me to be ready at 6am and that a driver and a translator would take me 4 hours into the desert to the oasis of Makit where I might hear some dolan musicians. 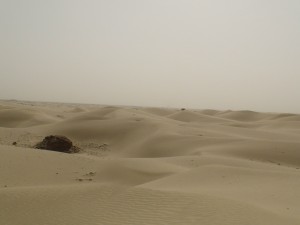 Oon the road through the Taklimakan Desert

Sunrise found us passing the donkey carts of farmers bringing their wares into the city, then through endless dunes and small farm villages.  We eventually made our way to the county seat of Makit.  There we picked up the local “minister of culture” – a robust Uighur woman – and headed out to a farm on the outskirts of town.

The farm animals scattered as we turned down a lane towards a group of rural farmhouses.  With my arrival, a messenger was sent on a motorbike into the fields to fetch the other musicians – who put their tools down and headed home, two to a motorbike, with instruments strapped to their backs.  We were led to a separate building, covered in carpets, clearly set aside for music-making.  I was told that all the musicians were members of an extended family headed by two 70-year-old twin brothers. When I asked about passing on the traditions I was told that the authorities did not allow students.  After a few pleasantries and tuning up, the music started.  The twin brothers clearly led the ensemble.  Each suite of maqam followed roughly the same format: an unmetered intro where all the instrumentalists play different almost contrasting parts, which are actually preset forms, after which the drums sets a strong rhythm, the singing starts and then progresses through 3 –4 different rhythm changes before the maqam suite ends.  Each piece lasts about 10 minutes and everyone seems to know all the parts.

On my return to Beijing I saw a giant poster of these same musician farmers and learned that these very brothers have been selected by UNESCO as living monuments to intangible cultural heritage!  What a fortuitous field recording trip.

Jeff Greene is an artist and musician who feeds his interest in the residue of world culture by traveling widely and making field documents of his experiences. “I’m interested in the universal language of music and how different cultures express the basic human impulse.”