‘The Rolling Stones of Salsa’, Los Van Van, come to SOB’s for two nights. Charismatic leader, Juan Formell always puts on a memorable show and the only way to see this group is up close and personal. Van Van are innovators of the Cuban style of Salsa, known as Songo and the band commits itself not just to entertaining fans but also producing vibrant music that breaks new ground with unique melodies. The band combines Afro-Cuban, Rock, Hip-hop, funk, and disco to create the novel genre of Songo. Since its founding in 1969, the band has maintained its position as one of the top bands in Cuba through its fresh material. Juan Formell, band leader and composer of Van Van, is one of the most important keys to the group’s success; with his poignant lyrics and story-telling ability. The band’s extraordinary talent led them to win a Latin Grammy in 2000.

Niels Lan Doky is the first Danish jazz musician since the late great bassist Niels-Henning Ørsted Pedersen to attain international recognition and critical acclaim. At age 15, he was the protégé of American jazz legends Thad Jones and Ernie Wilkins; after moving to the US in 1981, he gigged and recorded with Joe Henderson, Clark Terry, David Sanborn, and Woody Shaw, among many other leaders. Niels released his debut album in 1986, and has since appeared on more than 30 recordings as a leader, sideman, and/or producer. His new CD is called Return to Denmark (Bro Recordings), and is a tribute to his motherland. A published writer and a skilled director (with his third film now in production), Niels Lan Doky is “a pianist of many parts,” wrote Richard Palmer in UK Jazz Journal. “He can be spicily laconic, appropriately rhapsodic, and fiercely muscular.”

The Mandingo Ambassadors’ regular show at Barbes. In the 1960’s and 1970’s, the government of Guinea engaged in a campaign known as Authenticité. It was a drive to create a new musical movement that would be specifically Guinean, but would include the modern wonders that were the electric guitar, the electric bass and the drumset. Musicians were given instruments and orchestras were formed. Surprisingly, the results proved mesmerizing and a myriad new bands were born. Many of them would go on to have a profound and lasting impact on African music. Mamady Kouyate was one of those pioneers. He played in various bands – his own band, Les Ambassadeurs du Mandingue, being one of them – but is probably best known as the guitarist in the the classic Bembeya Jazz National. Kouyate, who now lives in NY, has reformed the Mandingo Ambassadors, updating the sound of his youth, but keeping it very close to the standard of Authenticité. The new All-Star band includ es Ismael Kouyate – vocals; Mamady Kourouma – guitar; Oran Etkin – tenor sax & clarinets; Sylvain Leroux – flute, tambin and alto sax; Andy Algire – drums; Nick Cudahy – bass and Mamady Kouyate – guitar. “dazzling vocal and guitar patterns over a rhythm section that is like a perfect system” Ben Ratliff, NY Times.

The kora is a 21-string harp-lute made from a calabash gourd and used in West Africian songs of praise, ritual, and oral history for centuries. Musician Yacouba Sissoko is a kora master from Mali who has played with jazz, Latin and R & B bands as well as traditional African ceremonies.

Jaswinder Singh obtained his initial music training from his father, before joining the Gandharva Mahavidyalaya.  At a very young age, he took to listening and learning from masters such as Mehdi Hassan, Ghulam Ali and Jagjit Singh. Jaswinder’s favourite singer was Jagjit Singh, and in due course he became a part of the Jagjit Singh gharana. Jaswinder is not only a talented singer but also a versatile composer.
In 2000, Jagjit presented Jaswinder’s first ghazal album titled “Aage Aage Dekhiye” which was released by HMV.
The second ghazal album “Tamanna” composed and sung by Jaswinder demonstrates his coming of age as a consummate practician of the art. This album features melodies written by Nadeem Parmar, Farhat Shehzad, Rajinder Singh Jolly and others.

“IS AMERICA PART OF THE WORLD?” – Continues with Third Installment at Littlefields.

RED BARAAT. Led by drummer Sunny Jain, Red Baraat is the first and only dhol ‘n’ brass band of its kind in the States, melding the infectious North Indian rhythm Bhangra with brass funk and expressing the human spirit through improvisation and a powerful live sound. Comprised of dhol (double-sided, barrel-shaped North Indian drum slung over one shoulder), drumset, percussion, sousaphone, horns, and various vocalese, this NYC-based group plays fresh originals and Bollywood classics with an explosive stage performance and presence. In the short time since their inception, the group has delivered blistering performances at such varied places as the Montreal Jazz Festival, Chicago World Music Festival, Lincoln Center, the Pori Jazz Festival (Finland) and India Independence Day Parade.

The music of Mountain Man is nestled in the tradition of American folk, but shoots like diamond dust out of the nest into the high, wide atmosphere. Their songs are shaped by three searching voices, encompassing harmonies and a shared belief in and love of the world. Mountain Man’s members—Molly Erin Sarle, Alexandra Sauser-Monnig and Amelia Randall Meath—are mutually moved to sing by their love for people and for trees, birds and mountains, the ocean, the night, the moon and being a woman. Recorded in an old ice cream parlor from the turn of the 20th century, each track of the debut album Made the Harbor is imbued with the likes of warm breaths, creaking of floors, soft thumping of hands against their bodies, the clearing of their throats, or the false start of a tune, evoking the feeling of being in the room with the band as the record plays: demand for intimacy between the art and its listener.

John Shade’s debut album All You Love Is Need was recorded in 2009 (at Bon Iver’s studio in Wisconsin). Over the past year he has played to a growing fan base around the Boston area and has taken up residence in Brooklyn as of October 2010. Billboard calls his songs “literate and heartstring-tugging” and the Boston Globe calls the album “sublime”.

For ten straight years- the best of Brazilian Jazz led by the magnificent pianist & composer Cidinho Teixeira. Each Sunday Evening features a changing roster of the top local Brazilian vocalists.

Meredith Monk & Vocal Ensemble consists of some of the finest and most adventurous singer/instrumentalist/performers active in new music. Founded in 1978 to further expand Monk’s groundbreaking exploration of the human voice, the Ensemble has received multiple awards and critical acclaim, including a 2008 GRAMMY nomination for impermanence. Featured in many of the world’s most lauded festivals, theaters and concert halls, Meredith Monk & Vocal Ensemble can also be heard on numerous recordings on the ECM New Music Series label.

For this concert, specifically tailored to the Cabaret form that Monk experimented with in the 80’s, the songstress herself is joined by veteran Ensemble members Theo Bleckmann, Katie Geissinger and Allison Sniffin. Selected repertoire from the time period is featured (The Games, Turtle Dreams (Cabaret), Acts from Under and Above), along with pieces from the full range of Monk’s work, including Education of the Girlchild, ATLAS and Facing North.

Pianist Randy Weston, bassist Alex Blake, and percussionist Neil Clarke are joined by soprano saxophonist T.K. Blue, tenor saxophonist Billy Harper, narrator Kim Weston Moran, and special guest percussionist Ayanda Clarke. Mr. Weston signs copies of his recently released autobiography, African Rhythms, after the concert. Tickets, which include Museum admission, are $15 and can be purchased at museumtix.com or at the Museum’s Visitor Center. The concert is co-presented by the Museum and the Brooklyn Arts Council (BAC) as part of BAC’s yearlong initiative “Black Brooklyn Renaissance: Black Arts and Culture, 1960–2010.” 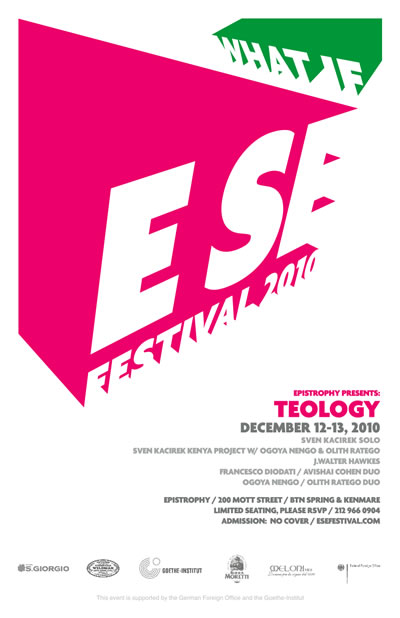 This is the 6th year of the  E se Festival . E se is Italian for “What if … ?” It is organized by Jason Candler and Luca Fadda (from Sardinia, hence the Italian). It takes place at Luca’s Epistrophy Cafe. The concept of the festival is: “Take some amazing artists who don’t ordinarily perform together, and ask them to perform together. Many of the artists that have met at the E se Festival go on to work together on future projects. It is a joy to see the seeds of discovery blossom into such beautiful projects.”

ARTURO O’FARRILL, pianist, composer, educator and winner of the Latin Jazz USA Outstanding Achievement Award for 2003, was born in Mexico and grew up in New York City.  In 2002, Mr. O’Farrill created the Afro Latin Jazz Orchestra for Jazz at Lincoln Center due in part to a large and very demanding body of substantial music in the genre of Latin and Afro Cuban Jazz that deserves to be much more widely appreciated and experienced by the general jazz audience.  His debut album with the Orchestra “Una Noche Inolvidable” earned a GRAMMY award nomination in 2006.