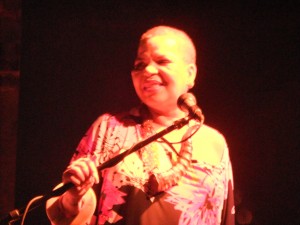 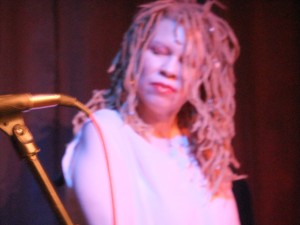 The night sprinkled a magical mist over the avenues and lights of the Lower East Side, home to the legendary Nuyorican Poet’s Cafe.  Nestled inside the quaint space of dark wood and a few tables was the eminent poet and writer Ntozake Shange.  Behind a black curtain, while people waited on line outside and those who were already in ordered glasses of cabernet sauvignon, Ms. Shange prepared excerpts from her novel, Liliane: Resurrection of the Daughter, to be read as an improvised poetic play.  The stage, another home away from home for Ms. Shange over the last thirty-five years, was transformed into a jazzy floating heaven with a bass player, Billy “Spaceman” Patterson, a trombonist who also played a didgeridoo, Craig Harris, and two actors. Claude E. Sloan, Jr. doubled as a psychoanalyst and a brash and smooth latino photographer and M. Nahadr played Liliane’s (the title character played by Ntozake) inner spirit and memory.  The mixed media performance included abstract kaleidoscopic movement infused with geometric shapes that lit up and rolled across the stage curtain like slight waves at midnight.

The small crowd waiting anxiously to get in was not sure if the author of For Colored Girls Who’ve Considered Suicide when the Rainbow is Enuf was actually in the building next door to a bakery selling the sweetest flan and bread pudding one’s ever tasted and across the street from a housing project.  The Lower East Side also known as Loisaida to its Nuyorican constituents is considered a downtown Manhattan hub for urban bohemians baptized in salsa, the beat of congas and spoken word poetry.  Ntozake Shange has been a part of its family for decades of art and struggle. It was hard to believe, since the poet’s tour de force, which premiered on Broadway in 1976, is currently a film adaptation in theaters across the country that she would be performing.  Indeed she was.  Liliane: Resurrection of the Daughter, her novel published in 1994, is her latest theater piece that incorporates music and dance as part of the script’s dialogue.  The only prop, a gold couch cascading with satin and silk red, orange, and yellow embroidered sequined pillows, was where Ms. Shange gracefully stretched and read her sensual and genius first-person narrative.  She fixed her long gold nails into improvised Indian mudras found commonly in Oddisi style dance and traditional yoga meditation while M. Nahadr, who played the spirit and memory of Liliane’s voice and reminiscent anecdotes, hummed arias and offered her winding arms and legs that shaped the trombone and bass coming from the left side of the stage.

Dressed simply in a white dress that bared her thighs and calves meant to be seen, wearing an emergency-red sparkling lipstick that made her skin glow in a sateen ecru, with the blondest locks striking at the air as she moved across the stage to the words being spoken, M. Nahadr translated the energy of telepathy between her and Ms. Shange into flesh.  It was a surreal experience to behold. Ntozake Shange, concentrating in repose on her personalized couch of cushioned gold, told Liliane’s story of being a smart woman who craved intellectual and sentient intimacy from a man who spoke a foreign language and understood multiple veins of artistic expression.  Her ideal, unable to be met in just one man alone, belied frustration, humorous indulgence, emotional experimentation, and a few curse words.  The photographer and Liliane’s lover, Victor-Jesus, took the audience on a trip through his and Liliane’s relationship. Liliane described as la gringa negra and himself described as a boricua moreno (black man imbued with the gift of speaking Spanish born or hailing from Puerto Rico) prospered in an invisible detection of swagger and infatuation with his lovely sexually free ingenue until she got tired of the way he portrayed a certain pretense of masculinity known in New York City streets as self-absorption. 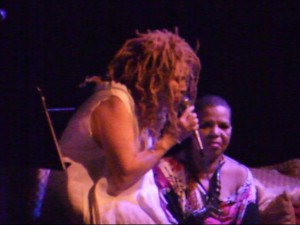 Alternately, the character of photographer, Victor-Jesus, in his dual role as psychoanalyst, coached a neurotic and sexy Liliane towards understanding her identity as a woman who is true to herself and what it means to be an authentic friend.  Without revealing the suspense of the ending and full story line, Liliane works with her analyst through a tragedy to discover a universal answer to what it means to live as a complex woman who seeks above all love in all its dimensional forms. 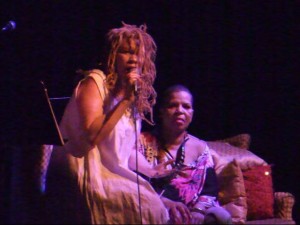 Ntozake Shange thanked the audience for attending what she called an open rehearsal reading of Liliane.  Her spark was dimmed only by her humility, uncharacteristic for a poet of her standing.  In a surprise tribute to the author, M. Nahadr performed a powerful song called “I Found God in Myself and Loved Her Fiercely.”  Her voice filled the room and brought tears to people’s eyes.  We all gave a standing ovation knowing in that small space we were all special having just witnessed a simple piece of spectacular theater.