Abjeez =Persian slang for sister … and that’s just what they are – Safoura and Melody Safavi.
Backed by a colorful crew of musicians, the two abjee’s present their own original brand of Persian world pop!
Their lyrics, often humorous and sometimes rebellious, are written in Farsi, English, Spanish and Swedish – the  expressive groove of the music and the abjees’ dramatic delivery break down all language barriers to create a new synthesis of cultures.

Collaboration and innovation inspire this performance, in which Alden Gatt brings new life to rarely heard Satie repertoire with the imaginative gestures of mime artist Laine Barton, and the forward-thinking jazz harmonies of Chopin’s Nocturnes are revealed through the glosses of saxophonist/flutist Jay Rodriguez. Alden’s experimental settings of the mystical poetry of Rumi will be performed with a stellar ensemble including Arooj Aftab and Aida Shahghasemi.

A rare solo performance by American oud player Brandon Terzic. A chance to hear the instrument in its most evocative and intimate setting, alone and acoustic.

Miya Masaoka, musician, composer, performance artist, has created works for koto, laser interfaces, laptop and video and written scores for ensembles, chamber orchestras and mixed choirs. In her performance pieces she has investigated the sound and movement of insects, as well as the physiological responses of plants, the human brain, and her own body. Within these varied contexts of sound, music and nature, her performance work emphasizes the interactive, live nature of improvisation, and reflects an individual, contemporary expression of Japanese gagaku aural gesturalism.

A SPIRITUAL CURRENT always powers Leni Stern’s recordings, especially on “Africa,” an album inspired by her immersion in Malian and Senegalese culture. Clearly the German-born, New York-based singer-songwriter-guitarist has found another home. Recorded mostly at singer Salif Keita’s studio in Bamako, Mali, “Africa” is a cross-cultural prayer meeting of sorts.

7. Get Your Dance On turns 1 year old with Evolver! 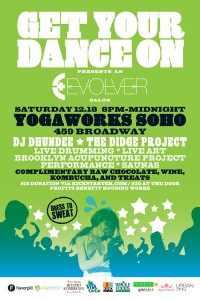 TICKETS / DONATE / GET HOOKED UP: http://www.kickstarter.com/projects/natashablank/get-your-dance-ons-1-year-anniversary-with-evolver

December 18th we’ll join forces with Evolver.net to take over YogaWorks Soho’s gorgeous duplex space, complete with three huge rooms, chill spaces, saunas, and showers for when you’re all danced out, and create an opportunity for NYC’s finest humans to revel in their collective awesomeness and have a freakin blast.

TALIBAM! At a time when most culture sticks to conservative niche opportunities, Talibam! is interested in expansion and exploration; They manage to part the sea by not sticking to genre, aesthetic predisposition or the usual norms of what being a ‘band’ is. More inclined to put on a show that any and all will like, and not be stymied by ‘avant’ type casting, they have won over both unsuspecting and in the ‘know’ audiences worldwide. The music of TALIBAM! though is not a serious smoldering affair. They are interested in fun, performance, and nuanced humor that creates a psychedelic pastiche of ‘black sabbath’ ‘sun ra’ and ‘cheech and chong.’
On their past two studio albums, they have been joined by Cooper-Moore, Jon Irabagon (Thelonious Monk Jazz Saxaphone Award Winner 2008), Peter Evans and others. Working with both jazz and rock musicians, Talibam!’s former collaborators are in BATTLES, TV ON THE RADIO, GRIZZLY BEAR, WOODS, AKRON FAMILY, and more.

Martin Bisi, a New York indie rock performer and record producer has been at a crossroads of indie/punk, avant garde, noire/cabaret rock, and electronic music since the early 80’s. In his live performances he combines indie rock songs with theatrical story-telling and unique sound layering that can be ambient and spacious, as well as beautifully chaotic – an ’80’s New York art-rock original. Martin Bisi’s band at this show will include Bill Laswell sitting in on bass
Bisi began his story in the downtown-meets-uptown scene of New York in the late 70’s, where hip hop from The Bronx coexisted with avant garde experimentalism, the punk/glam of CBGB’s, New Wave art-rock, and aggressive, nihilistic No Wave. In this world Bisi met Brian Eno who helped him start a recording studio in 1981. He has since realized albums by Sonic Youth, Swans, John Zorn, Africa Bambaataa, The Dresden Dolls, Herbie Hancock’s Rockit, Boredoms, Helmet, White Zombie, Cop Shoot Cop, Jon Spencer’s Boss Hog, Material/Bill Laswell, Foetus, Serena Maneesh and others.

Coyote Eyes started as a three-piece in Brooklyn, NY, in 2008, featuring dual male/female vocals. Starting in April 2009, they began releasing recordings of some of their first songs and they’ve just finished work on their first EP. Their sound has been described as “post-punk,” “art rock,” and “angular but melodic.” Recently, they’ve
begun including a fourth auxiliary player at most live shows.