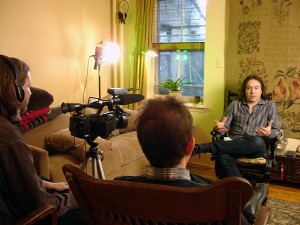 Alice Donut is a band that always brings together people who enjoyed a common, punk do-it-yourself outsider ethic – with a big emphasis on “freak” and “weird” psychology – people who enjoy a humorous take on an anti-corporate and anti-mainstream attitude, almost turning the tables – that the really funny freaks are corporate and mainstream. Alice Donut shows always seem like a celebration of this shared secret knowledge. And of course Alice Donut (notice the phonetic wordplay on L-S-D ) is a hard driving band – hard driving groves. Some of the best energy in Indie rock history.

FREAKS IN LOVE documents the 25 year career of the seminal psychedelic-punk band Alice Donut. From it’s humble beginnings to just play a gig at CBGBs to signing to Alternative Tentacles to performing at Reading Festival and touring with Blind Melon.

Through it’s ups and downs the band has remained friends and created some of the underground’s most compelling music. This is also the story of many bands from the late ’80s / early ’90s when getting in a van and touring the country was all one could ask for, when free beer and pizza were a luxury and then it blew out of proportion with one band, Nirvana.

Jello Biafra, Curt Kirkwood of Meat Puppets, producer Martin Bisi, music industry insiders and the band tell the story of how Alice Donut has been able to ‘Freak Freely’ by just doing it for themselves for 25 Years and counting.