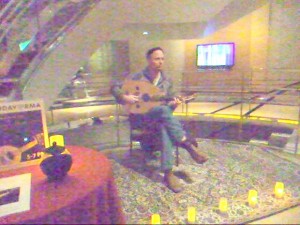 A rare oud solo performance by American oud player Brandon Terzic. A chance to hear his instrument in its most evocative and intimate setting, alone and acoustic. He played two sets of  maqam (music) which had Arabic or West African roots.  Each maqam evoked a different emotion in the listener.

The oud is suitable for both solo and ensemble playing. Having a warm timbre, low texture, and microtonal flexibility, the oud is known as  “the prince of enchantment.” It is the favourite instrument among theorists, composers as well as amateur performers. Complicated visual ornamentation is typical of the oud, especially in the rosette design and the wood inlay.

In between the songs Brandon talked a little to the audience describing the oud and explaining some of the songs.

I interviewed him after the show. Before starting the interview, he said that it was the first interview he has ever given!!!

So……….here we go with the interview!

He is a multi-instrumentalist and composer who has been in the NYC area for 10 years active both as a performer and educator. He has studied guitar with such greats as Mordy Ferber, David Fiucznski, and Lionel Loueke, and studied the oud with Bassam Saba and Simon Shaheen. He has also traveled and studied extensively with master musicians in Senegal, Morroco, and Egypt. He has applied Mandinkin (West African), Touareg, Berber, Gnawan, Arabic, Nubian, Flamenco, and East Asian styles to the guitar as well as the oud and saz; specifically the oramental, modal and rhythmic aspects. Coupling this with traditional Jazz chord-scale harmonic theory, Brandon is able to impart a very well-rounded approach for students of the guitar as well as anyone interested in applying these concepts to any instrument. He has also given lectures/master classes at Asia Society NY, Johnson State College, and numerous other universities and primary schools, touching upon subjects such as Music in Islam, the Social and Spiritual Contexts of World Musics, as well as the Migration and Genology of American Roots Music.