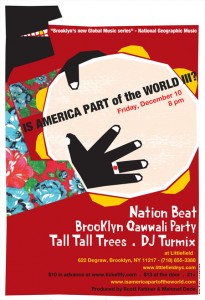 From time to time, Sohrab (DooBeeDoo’s editor-in-chief) and I head out together to catch a live show that’s a little different, with a little more energy and planning, and in turn, impact behind it. Last Friday, the 3rd installment of the Brooklyn global music fest, “Is America Part of The World?”  was such a show.

It was put on at Littlefields in the Gowanus area of Brooklyn, and thus required a little maneuvering to reach, a little stepping off of the clear path from train to club and back. But it was worth it, as event promoter Mehmet Dede and Nation Beat drummer Scott Kettner obviously put the bill together with a party in mind, since all the bands use roots rhythms to get bodies shaking, and on top of that, the night was Kettner’s Birthday.

The result was impressive. First band Tall Tall Trees came from the folk, indie, feel-good side, but 2nd act Brooklyn Qawwali Party jumped fast into a unique hybrid of Pakistani traditional and American jazz that for some was the highlight of the night, featuring trumpet and two trombones, multiple percussionists, and impressive guitar runs from Mike Gamble. Last was Nation Beat with an equally boisterous and wide-ranging sound – ever hear a beautiful, booming Brazilian vocalist go from singing in Portuguese to evoking Hank Williams’ twang on a globalized cover of “So Lonesome I Could Die” ?

And that sums up the feeling of “Is America Part of The World”, a simple, yet complete experimentalism, rooted in traditions from all over, honoring what came before, but trying to get at something new for today. Since coming to New York in 2008, Sohrab has met so many local concert and festival organizers with almost the same concept and passion for music. It’s a lot of work to prepare a festival, at least three months of work, and that never guarantees a full house (as this show demonstrates – add cold weather and other shows to compete with, etc.) But we were both impressed to see a promoter working with bandleaders to truly build every part of the night, make the energy right, and deliver the music, on top of all. We both agree that the city needs much more of this – people from all over working together, pooling resources and ideas, to put on complete shows that people want to stick around for deep into the night, no matter how cold it is or how much fucking work they have to do the next day!