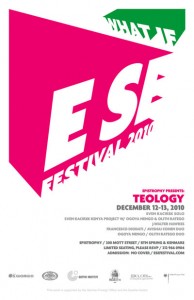 Jason emailed me the concept: “The festival this year is quite a whammy with artists from Germany, Kenya, Italy, Israel, and Mississippi. The concept of the festival is simple. Take some amazing artists who don’t ordinarily perform together, and ask them to perform together. Many of the artists that have met at the E se Festival go on to work together on future projects. It is a joy to see the seeds of discovery blossom into such beautiful projects. This year’s main artist is Sven Kacirek…”

Unfortunately I couldn’t see all bands, so I decided for this report to concentrate on Sven Kacirek and the Epistrophy Swing Orchestra led by the organizers Jason Candler on alto sax & clarinet and Luca Fadda on trumpet. Unfortunately Sven’s two Kenyan vocalists couldn’t come because their visas were denied by the US embassy in Kenya. This was shocking news for the organizers and Sven. What could Sven do alone?

The first night he showed a video of his African project and afterwards he was joined by Jason on alto sax and Kenny Wolleson on toy drums and percussion. Music style: mninmal jazzzy-worldy fusion. They played songs from the new CD.

I had also the chance to interview Jason Candler and Luca Fadda after the Sunday show.

I don’t know whether there will be another festival next year, the seventh one. But hopefully they promote it better next year. It’s a shame when people only come to dine instead of dining AND listening to the music.