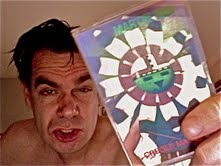 Lunch for your ears – Pain in my heart

This had to be my last day in heaven. I had had a hell of a wonderful time in the USA through a USA Homestay Program. Thirteen months on a visa with a very definite expiration date. And the date was now: November 17, 1989, the day the world seemed to end. With just a few hours before my flight back to The Netherlands and still a few coins left in my pocket, I stood in front of the counter of “Lunch for your ears”, my favorite record shop in whole NYC. “This will get you across the pond”, the owner of the shop said as he handed me a cassette with an exotic looking picture on it. Back on the street I wondered if this really was the right tape to cancel out the noise of the plane and ease the pain of leaving the land I had come to love. With a feeling of both excitement and sadness I got on the subway to JFK airport.
I had just spent my last dollars on Creole Mass, a solo record of Martin Bisi.

To me, Martin Bisi was just a name on a record sleeve. In fact, on sleeves of quite a few records I bought as a schoolboy in The Netherlands in the eighties. But now he had become a name in my address book as well. Introduced to me by my friend Sohrab Saadat Ladjevardi who asked me if I could offer some hospitality to a friend from Brooklyn.
No problem at all. “What’s his name?”
A few hours later I stood on the platform waiting for the train that would bring me Martin Bisi.
“I hear you play a mean bass” were his first words when he got off the train.

Here we stand today, a 4-piece band, in front of our hotel, in the middle of Frankfurt’s bustling Red Light District.
We just played our first show. Unrehearsed but spot on. The smallest crowd I ever played for. One finger-pointing boot-stomping fan right in front of Martin made up for the whole city. Now the pressure is off, we need some relief.
Crash! Across the street a short Turk crossing the street gets hit by a tall German in a small vehicle. The Turk continues to the sidewalk with no apparent signs of discomfort.
“Come inside with me” the lady behind us says with a thick Eastern-European accent, putting a cell phone in her pocket. The German gets out of the car.
“Please come inside. I cut off my phone conversation just for you guys”.
The German driver tells the Turk he should have watched out.
“You really didn’t have to do that for us” I answer.
Other Turks who witnessed the accident now surround the driver.
“Come on in guys, please, just have a look”.
The invitation to love gets drowned out by the voices of anger. And not by that alone.
Bang! The sound of a scud missile hitting the next block. It turns out to be the doorman of a strip joint who throwing fireworks after an emerging customer.
The German driver, regretting he got out of his vehicle to begin with, backs up to his car.
Bang again! Another piece of fireworks flies after the customer, who gets to his car right before the explosion.
“Write down his license plate number!” the Turks yell, as the German driver starts his car, trying to leave the situation.
The scene is getting ugly. Bisi gives us a nod. Back to the hotel.
The sound of sirens is getting louder. An ambulance pulls up. The Turk expires as the ambulance personnel pick up the stretcher.

White Trash Fast Food or: How to Glam the Spam 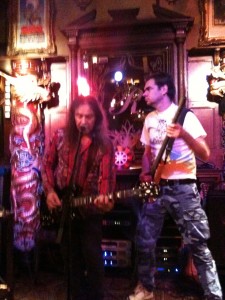 This has to be the most ornately decorated joint I have ever set foot in. A South Pacific underwater world with Chinese dragons and a Western-style playroom.
But the most decorative treasure of all is the DJ. A seductive looking glamrocker in a tightly cut leopard skin jacket. Black nails. Black eye shadow. A haircut that would make Rod Stewart look like Mister Rogers on grilled Hershey Bars. In fact, the DJ calls himself DJ Mister Rod.
The line-up of that night is quite luxuriant as well.
First there is us. Then DJ Mister Rod. And then Skip ’n’ Bip. DJ Mister Rod again. After that Honeysuckle & The Roastcockers. Again DJ Mister Rod. Us one more time. Happy Ending after all.
At the end of the night the never-ending ritual of coiling cables, moving amps, wrapping cymbals. All of that to the glamorous rock sounds of DJ Rod who seems to be having the time of his life, swinging his hair back and forth.
“Nice hair Mister Rod” I say, hoping to get a hand from the DJ moving the amp off the stage. “Call me Rod. My girlfriend fixed my hair” he says. “What’s the point of a girl who makes you look just like a girl?” I snap, realizing I’ll have to carry the amp myself.
“It would look good on you, too”, Rod tells me.
“Uh uh, tried that once My girlfriend responded with ambivalence when I gave her a girlfriend experience.”
The promoter goes around the room handing out cans of beer. No point telling him I don’t drink beer. Bisi tells us to get moving, impatiently tapping his watch. In a reflex I toss the beer can over my shoulder without looking. It hits the mirror behind DJ Rod, a stuffed pork head comes down, making a perfect landing on the turntable. Twisted Sister skips, Rod loses his balance and his wig as well. The sight of his heavily made-up bald head is frightening. The flying wig knocks over a candle and the flame hits the vinyl. In seconds the place is a mess.
We run for the exit, jump over the hood of a cab, pull out the passengers and tell the driver to step on it.
That’s the type of thing Rod Stewart would do I figure.

Free the toad from the cage – Hit the road, keep the rage

October 1st, 2010. On the road, somewhere between Berlin and Prague. 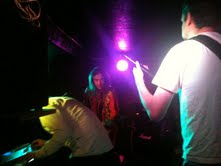 Know the difference between a porcupine and an Audi?
Prague Radio 1 is expecting us and it’s a tight slot. With Bisi behind the wheel we’re bound to get there faster than the average broadcast engineer can turn on an On Air sign.
Speed is a scalar quantity and does not keep track of heritage.
Flashing headlights of a jazzy Audi behind us signal us to get out of the way.
A porcupine has the pricks on the outside.
A little prick in the shape of a middle finger slides up on us on the right.
Mister Audi is not the only one who masters the art of sign language. Digging into his Ramones arsenal, Bisi takes both hands off the wheel and conjures up a heartfelt: Hey Ho – Go Slow!
Our new friend in the right lane hits the gas again and moves his car in front of ours, only to slam the brakes the next second.
Which gives us a brief moment to read his bumper sticker:
“Over the hill? Drive like Bill!”
Upset and confused we reach the studio, just a half minute before the show starts.
We are welcomed by a hot-faced host, who frantically waves a key chain with the Audi logo on it.
On his jacket is a button saying “Bill Gates tailgates 2!”

When in Prague, do as the Romans do 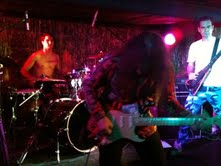 Martin, Pascal & with Brian Viglione on drums (Photo by courtesy of Pascal Plantinga)

The Prague show was a no problemo. Entertaining roosters in bat caves is what we are cut out for.
We also like to roam. Prague wasn’t built in a day. Easy does it for us.
Every hour masses gather on the main square to watch a medieval magic clock. Ducks are supposed to come out, every night at nine. The excitement of thousands of people anticipating the moment of their life affects even us. In just a few moments the magic will take place.
But as soon as the clock strikes nine and bells begin to chime the entire crowd starts flapping their elbows in a birdlike manner. Not only that! People are singing too. And we are shocked to hear it’s a song we know: it’s the Hokey Pokey!
It is slowly dawning on us that the terror of flash mob has reached Prague too. Trapped amidst thousands of people turning their left arm in and out, we realize our fate is doomed. Whichever direction we try, there is no escape. The ever-alert Bisi has the solution: if you can’t beat them, join them! I look at my fellow band members in disbelief. Too late! It’s obvious top man calls the shots.
And so here we have it: four ultra cool psychedelic punk rockers engaged in a massive group dance. And enjoying the living daylight out of it! 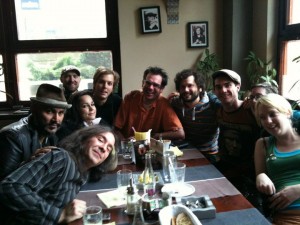