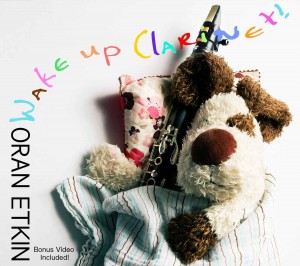 Oran Etkins’ Wake Up Clarinet has been out for some time now, but worthy of a good listen. Created as a kid’s album, this recording can be enjoyed by adults alike. Its creator, Oran Etkin, is up for a Grammy for contributing a song to the Healthy Food For Thought compilation released by Timbalooloo Music records. Etkin’s music school “Timbalooloo” has created a well-deserved buzz from such names as Harvey Keitel, Liev Schreiver, and Edie Falco.

This CD is enjoyable because it provokes children to involve themselves with music rather than just entertaining them. Etkin’s zest and joy makes his didactic intentions playful and informative rather than just silly. A stand-out track is the opening number “High Low” which is a clever little lesson in pitch movement involving solfege. Also, history lesson on “eh La Bas” has a fun little introduction about the settlement of Louisiana and King Louis XIV. The CD has fun narratives that balance uncompromising musicianship.

With help from a great cast of musicians including drummer Jason Marsalis and vocalist Charenee Wade, this well recorded, well balanced work is perfect for toddlers and parents of jazz fans alike.

Listen to Wake Up Clarinet

News: Grammy nominated: Healthy Food For Thought, a compilation album featuring tracks by Oran Etkin, Russell Simmons, Moby, Julian Lennon and others, just got nominated for a Grammy in the Best Spoken Word Album For Children category! Read More And Listen To The Track…