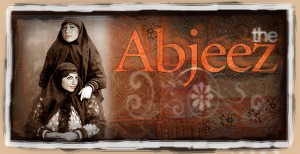 Iranian rock bands I have heard of, but haven’t seen live, are: 127, Barad, Hypernova and Kiosk. Abjeez is the first Iranian Diaspora indie pop band that I had the chance to catch live on stage. This band is one of the more popular bands in the Diaspora and their videos are very well presented in YouTube.

Abjeez was founded by two young sisters from Iran: Safoura and Melody Safavi. In 1987, after the Islamic revolution in Iran, the Safavi family immigrated to Ostersund in Sweden. Both sisters were raised and educated in their new country. The younger sister Safoura has no memory of Iran as opposed to her older sister Melody.

They became interested in music at an early age. Safoura composed her first song when she was 13. Since she asked Melody to write the lyrics to this song both decided to do more songs together which resulted in forming their band in 2005. The band was called Abjeez, which means in Persian slang “sister” … and that’s just what they are.

In comparison to other musicians of Iranian descent they speak Farsi very well, and they have no problems communicating and mingling with Iranians outside of Iran. I assume that at home Farsi was spoken mainly, and the Safavi parents educated their children in an Iranian way reminding them of their Iranian roots. They still keep their contacts with their motherland.

I think this is also the reason why they care so much for Iran, and it is a sentiment which is very well expressed in some of their songs and also in interviews. For example, last year in June, soon after mass protests broke out after the summer 2009 disputed presidential election, they were one of the first bands which made a clear statement to the revolts in Iran with their song “Bia” (Come), which came out as a music video at the right time and was extremely popular.

Abjeez represents a young generation of Iranian bands which believes that music is a part of life and a tool to express social messages in order to make people aware and motivate them to make changes in their lives. They extended their status as musicians to music activists. In an interview with Radio Free Europe Radio Liberty Iran: Melody Safavi says: “And in the past 10 years or so, music — especially what they call “underground music” in Iran — has flourished a lot, and it has really been a way of communication within people, especially the young people. And they are really expressing what they are going through: all the hardship, all the issues in the society. Thirty years ago, music was only about love, and flowers, and gardens, and stuff like that. Today, it’s about everyday life, and young people are really saying things that they perhaps wouldn’t dare to say even in their own homes, to their parents. They’re talking through the music, so of course it’s a strong tool.” (Read the whole interview.)

Abjeez was a 6 piece band (bass, 2x voc, drums, percussion and guitar). They played two sets of their old and new songs. The first set started with the “Bia” and a short spoken message to the fighting people for freedom in Iran.

They were very energetic and positive on stage, trying to communicate directly with the audience which was mostly attended by Iranians. Their sound was a mix of styles; mainly they played Reggae and Ska with elements of indie rock and Latin. The first set ended with a country style song. Their lyrics, often humorous and sometimes political, are sung mostly in Farsi, a few in English, Spanish or Swedish by the two sisters. Unfortunately the audience didn’t care so much about the political messages. They were more interested in the grooves and dancing and looked like they just wanted to party.

In one of their songs, Abjeez played the famous Iranian 6/8 rhythm and danced to it on stage.

In general, to see an Iranian band which tries to be a voice in a political and social movement is really refreshing. Safoura and Melody tried to balance the weights of entertainment and politics in their performance. Personally, I would like them to express in a musical way, what change means for the Iranian people. I think it’s not enough just to say that Iran needs human rights and should do the changes in a peaceful way. How is the big question!

A little history about the band

The Abjeez’ break-out album “Hameh” — including the track from their DVD Eddeaa, chosen by New York’s Tribeca Film Festival for the short film competition — was released in late 2006.

The band performed live at the IFFR (International Film festival Rotterdam in Holland), Great American Music Hall in San Francisco and New York City’s Kimmel Center for the Performing Arts in the early 2007.