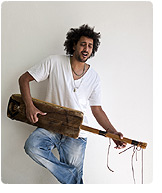 YEMEN BLUES was founded by Ravid Kahalani, a rising star in Israel who grew up to a traditional Yemenite family, learned the language and the traditional chants of his origin. Ravid joined forces with Omer Avital, a well known bass player and composer, and together they gathered YEMEN BLUES, a group of musicians from New York, Israel and Uruguay which fuses traditional Yemenite music with blues, jazz, funk and West African rhythms and melodies.

The rising star Ravid Kahalani was born in 1978 in Israel to a Yemenite family which originated from Kohlan near Sanaa district in Yemen. Coming from a Yemenite-Jewish culture which is well known for their singing talents, his family has a great history of singers. Read more about him.

Born and raised in Israel to parents of Yemenite and Moroccan descent, Avital was surrounded from early age by the diverse musical and cultural landscape of his homeland: Israeli folk songs (a mix of Arabic melodies with European harmonies), Yemenite-Jewish liturgical music (an ancient and beautiful tradition of poetry, melody, rhythm) and Dance-, Arabic and Mediterranean popular music from Egypt, Lebanon, Turkey, Greece, North Africa etc… the various Jewish traditions of songs and prayers (Ashkenazi and Sephardic), European Art music, Western popular music and American Jazz and Blues. In 1992, Omer Avital moved to New York. Read more about him.