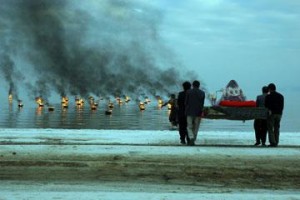 Even before he made international headlines for his recent affiliation with the Green Movement in Iran, Panahi was celebrated as one of the most influential cinematic voices in Iranian and world cinema.Panahi was recently sentenced to a six-year prison term and a twenty-year ban on filmmaking. The sentence is being appealed. (Read additional background following program schedule below.)

Panahi is known for his realistic and unflinching portrayal of contemporary Iranian life, treating his subjects, often women and people living on the margins of society, with deep humanism. Using non-professional actors to play characters very much like themselves, his films evoke a social urgency.

Tickets can be registered online and are available for pick-up on days of events. For more information, visit http://asiasociety.org/jafarpanahi or call (212) 517-ASIA.

This series is part of Creative Voices of Islam in Asia, a three-year initiative made possible by the Doris Duke Foundation for Islamic Art.

PROGRAM SCHEDULE (all films in Persian with English subtitles)

In this dreamlike film, a boatman navigates the increasingly brackish waters around a coastal land, collecting the stories of heartaches and tears of its inhabitants. As he witnesses misguided attempts to appease the gods and make the land green again, whether by offering a bride to the sea or penalizing a painter who sees in different colors, the boatman remains powerless. The deeply poetic film is an allegory of intolerance, brutality and superstition. Film edited by Jafar Panahi. Director Rasoulof received a 6-year jail sentence along with Panahi. Both are appealing their sentences.

Defying the law that prohibits women from attending sporting events, several Iranian young women disguise themselves as men to crash the qualifying game between Iran and Bahrain for the 2006 World Cup at Tehran’s Azadi Stadium. Mostly shot in real time during the actual game and featuring non-professional actors, the film, at once comedy, political allegory and suspense, is an engaging tale about lively young women fighting for freedom.

Panel Discussion: A Tribute to Jafar Panahi and Creative Expression in Iran

The panel highlights the cinematic achievement of filmmaker Jafar Panahi and explores the current state of creative expression in Iran.

Hussein, a pizza delivery man and Iran-Iraq war veteran, rides his motorcycle in Tehran to deliver orders. His job takes him to wealthy homes where he witnesses firsthand the life of the privileged. This day-to-day experience leaves him feeling invisible and humiliated. Circumstances lead to a violent robbery in a jewelry store, where Hussein takes on a final destructive path. Starring a real-life pizza delivery man, Crimson Gold takes a sharp look at economic disparity in a society where unrest is always waiting to explode. The screenplay, written by Abbas Kiarostami, is based on an actual event.

Several women, each having spent time in jail, find themselves in the punishing bustle of Tehran. One woman tries to return home but cannot get on a bus unaccompanied by a close male relative. Another woman seeking an abortion is threatened with violence. Others take desperate measures to find money. All are trapped in a circle of fate for women living in an oppressive society, whether in or out of jail.

Check out this video as well State versus Filmmakers – Iran

Jafar Panahi, born on July 11, 1960 in Mianeh, Iran, is one of the most influential filmmakers in Iran. After studying film directing at the College of Cinema and Television in Tehran, Panahi made several films for Iranian television and was the assistant director of Abbas Kiarostami’s film Through the Olive Trees(1994). He has directed several films and won numerous awards in international film festivals such as the Golden Lion at the Venice Film Festival, the Silver Bear at the Berlin Film Festival, and the Camera d’Or at the Cannes Film Festival.

One of Iran’s most celebrated filmmakers, Panahi is known for his realistic portrayal of contemporary Iranian life. Whether he is depicting women struggling in an oppressive environment or people living on the margins of society, Panahi treats his subjects with a deep sense of humanism and compassion. Often using non-professional actors to play characters very much like themselves, his films evoke a social urgency. Feature films that Panahi has directed include Offside (2006), Crimson Gold (2003), The Circle (2000), The Mirror (1997), and The White Balloon (1995). Panahi has also worked as writer and editor for other directors’ films.

Panahi is a supporter of Iran’s Green Movement that took shape in demonstrations in June 2009 following the disputed national elections. In late July the same year, Panahi was arrested after visiting the grave ofNeda Agha-Soltan, a young woman who was shot to death during a protest. He was released 8 hours later following intense media coverage. A month later, he travelled to Montreal to serve as jury president of the World Film Festival, appearing in a green scarf on the opening night.

In February 2010, Panahi was prohibited from travelling to the Berlin Film Festival to participate in a panel about Iranian cinema. In March 2010, he was taken from his home along with his wife, daughter and 15 guests, including filmmaker Mohammad Rasoulof (The White Meadows). Most were released in 2 days.Rasoulof was released in 16 days, while Panahi remained in detention. The Iranian government claimed that Panahi was arrested for making a film about post-election events against the regime, a claim denied by Panahi’s family.

The Iranian film community called for his immediate release. The international film community followed by signing a petition in April 2010. Signers included Francis Ford Coppola, Robert De Niro, Ang Lee, Michael Moore, Martin Scorsese, Federation of European Film Directors, Berlin Film Festival, Toronto Film Critics Association, among many others. Panahi was named a member of the jury of the Cannes Film Festival 2010 but was unable to attend due to the imprisonment. In May 2010, Panahi started a hunger strike in prison. He was released on $200,000 bail a week later.

On December 20, 2010 after being prosecuted for “assembly and colluding with the intention to commit crimes against the country’s national security and propaganda against the Islamic Republic,” Panahi was handed a 6-year jail sentence and a 20-year ban on making films, writing, granting interviews, and traveling overseas. Film director Rasoulof also received a 6-year jail sentence. Both are appealing their sentences.

About the Asia Society

Founded in 1956 by John D. Rockefeller 3rd, Asia Society is a nonprofit nonpartisan educational institution. Through exhibitions and public programs, Asia Society provides a forum for the issues and viewpoints reflected in both traditional and contemporary Asian art, and in Asia today. Asia Society is located at 725 Park Avenue (at 70th Street), New York City. www.AsiaSociety.org