South Africa’s ‘Voice’, Vusi Mahlasela, comes to SOBs as part of a tour supporting his most recent album ‘Say Africa’, which has the single of the same name. The incredible work was produced by Taj Mahal & represents an amazingly well-rounded sound because of that.

In his home-country Vusi is simply known as ‘The Voice’ because of his distinct, powerful voice and his poetic, optimistic lyrics. His songs convey messages of hope connected to Apartheid-scarred South Africa with its promise for a better future. Songs like ‘When You Come Back’ & ‘Miyela Afrika’ have become famous beyong the borders of the African continent. In addition to being an artist, Vusi is also a dedicated social activist working with Mandela’s 46664 iniatitive, OXFAM, The African Leadership Academy and the ONE campaign.

Date: Thursday, February 24, 2011
Time: 7:30pm
Venue: Le Poisson Rouge (158 Bleecker Street, New York, NY 10012, ph: 212- 505-3474)
Ticket: $10
Genre: contemporary music
Four versatile cellists performing original compositions and arrangements of rock, classical and jazz music. The mission of this group is to feature the gorgeous sonority of the cello in music that is open across a range of genres. Members of North Sky are composers, arrangers, and performers. They have all collaborated with celebrated artists in the classical, pop, rock, and jazz worlds. Their combined experience has propelled them forward to form a new creative endeavor that seeks the highest level of artistry. Their first EP is to come out late spring of 2011.

They are Eleanor Norton, Jane Cords-O’Hara, Rubin Kodheli and Robert Burkhart with Brian Chase on drums (of the Yeah,Yeah,Yeahs). Special guests on cello Greg Heffernan.

Falu is a classically trained Indian vocalist whose diverse musical repertoire captures both her traditional roots as well as her unique ability in combining Hindi music with an inventive rock sound.  She has served as an ambassador of Indian music from Carnegie Hall, and her live performances have been featured nationally on FOX TV and internationally on National Geographic TV.  Her voice has also been captured in multiple films including Angelina Jolie’s directorial debut A Place in Time.  One of Falu’s most stunning performances was at the Time 100 Gala where she was invited to perform a duet with Slumdog Millionaire composer A.R. Rahman in front of the one hundred selection of Time Magazine’s most influential people in the world of 2008, which not surprisingly included First Lady Michelle Obama and Oprah Winfrey.

Finally, Falu performed at the White House in November of 2009, where she was invited to sing alongside A.R. Rahman again at President Obama’s first State Dinner in honor of the Indian Prime Minister  Manmohan Singh.

Described as a “revelatory troupe” in the New York Times, the celebrated guitar maestro Paco Peña and his outstanding Flamenco Dance Company return to New York with their new production Flamenco Vivo. The company features a stellar cast of guitarists, percussionists, vocalists and three dancers – Ángel Muñoz, noted for his “regal, smoldering dancing” (New York Times), the commanding Ramón Martinez, and Charo Espino, who “can distill a whole dance tradition through the eloquence of her hands” (The Guardian, UK).

The third generation of O’Farrill keeps the family tradition vibrant. Like their grand-father Chico and their dad Arturo, Adam and Zach – respectively 15 and 18 years old – are constructing their own muscial language based on the lessons from the past and contemporary sounds. Their new album, Giant Peach, has been called “A giant success” by All About Jazz and the Wall St Journal says of their music that it “bristles with confidence and creativity” Livio Almeida – saxophones; Adam Kromelow – piano; Adam O’Farril – trumpet and Zach O’Farrill – drums.

Join us for a lovely evening of Persian poetry set to lulling music, performed by truly passionate artists. The poetry will mainly be that of Sa’di and Rumi and the music will vary from Iranian Classical to Western Classical. 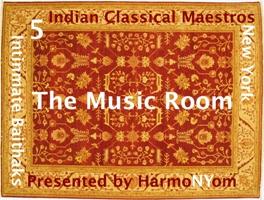 Nitin Mitta is one of the most prominent young tabla players. His rare combination of technical virtuosity, spontaneity, clarity of tone, and sensitivity to melodic nuance has led him to perform with such celebrated musicians as Pandits Jasraj, Rajan and Sajan Mishra, Vishwa Mohan Bhatt and Ustads Nishat Khan and Ut. Shahid Parvez Khan. Nitin received his early training in Hyderabad from Pandit G. Satyanarayana. To expand his repertoire of tabla compositions, he sought the guidance of Pandit Arvind Mulgaonkar of Mumbai, one of the most highly respected mentors of his generation.

Presented by HarmoNyom. And the concert will be followed by a lively conversation with the artists. The evening includes complimentary Chai and Indian-inspired gourmet snacks.

Guitarist Jesse Cook has lived a truly international life. He was born in ..Paris.. and spent his childhood in France and Canada. Now, he makes his living bringing his Spanish-style guitar to audiences around the world. “People’s reaction to the music doesn’t actually vary that much,” Cook says, pondering his international following. “What I’m doing is a little off the beaten path. It’s not Madonna, so my crowd is a little esoteric to begin with.”  He has released seven studio albums that have created an intensely loyal following.