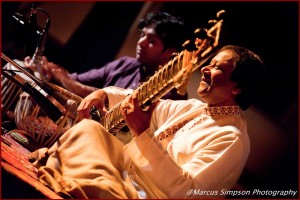 When a concert performed by Ustad Shaheed Parvez Khan is announced, those in the know ask two questions: Where? And When?

While it is customary to give a brief biographical description of an artist while writing an article like this, I’m afraid it does little justice to prepare for the experience of the music itself. That said, Shaheed Parvez Khan, known affectionately by his students as Ustad-ji (a term of respect used by his students; which I will hence refer to him in this article), was born into a family of musical royalty. Belonging to the Etawah Gharana, with musical and family ancestors including Sahabadad Khan, Imdad Khan, Enayat Khan, Waheed Khan, and Vilayat Khan. He was initiated into the Gharana by his father and teacher Ustad Aziz Khan. Achieving great artistic success at an early age, he became a Top Grade Artist of A.I.R., received numerous awards, including the “Sur Shringaar,” the “Kumar Gandharva Samman,” the “M. L. Koser Award,” and the “Sangeet Natak Acadamy Award.” He has released many recordings, performed in all the major music festivals in India, and has toured the US, Europe, Russian, Canada, Middle East, Africa, and Australia.

Joining him was New York based tabla virtuoso Nitin Mitta. Receiving his early training in Hyberadad from Pandit G. Satyanaranyana and Pandit Arvind Mulgaonkar; both disciples of Ustad Amir Hussain Khan of the Farukhabad Gharana. Mitta has performed with masters such as Pandit Vishwa Mohan Bhatt, Pandit Jasraj, Pandit Sajan Mishra, Istad Mishrat Khan, Ustad Irshad Khan, and many others. He is making a well-deserved reputation for himself as a brilliant tabla player.

On a quiet, and mildly cold Saturday night at St. John’s Lutheran Church in New York City, HarmoNYom presented the second of its Music Room concert series. These concerts are designed to recreate the ancient music rooms of India, where intimate gatherings would allow people to experience the music in comfort and with no distractions (it may be added that they are also donating 10% of all revenues from the Music Room Series to support Music Basti; a non-profit charity bringing music education to underprivileged children in India). In front of the stage was an open area with cushions where people could sit on the floor, just like in the old days. And frankly, that’s the best way to appreciate this music.

I arrived early, just before the sound check. Ustad-ji would arrive moments after I did. Veronique Lerebours, the founder of HarmoNYom, (producer of these concerts), and tireless purveyor of the finest Indian classical music in New York City, the production staff directed by Girish Raj, volunteers, and Ustad-ji’s students, were busy in preparation. Ustad-ji arrived and began the sound check. The people in the room were quiet while Ustad-ji played. He has that effect on people. Watching and listening to him tune is an interesting experience for any musician. He made some last minute adjustments on his sitar; an Ibrahim & Bashir SPK model. This sitar, one he’d had a hand in designing, is an extension of the Vilayat Khan design. Its tone is more pronounced in its mid range and bass and had a presence that contrasts the stereotypically metallic or trebly tone associated with the sitar (especially by those in the west, who know the sitar only through its presence in pop music.) Ustad-ji exploits the acoustic properties of the instrument well. 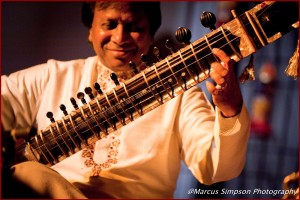 A platform a little under a meter high had been set up for use as a stage. This was a good idea; it allowed good visibility for everyone in the audience. And as with other HarmoNYom produced concerts in this venue, the Indian decorations by Sridhar Shanmugam blended in an indescribable way with the traditional Christian trappings of the church.

Ustad-ji and Mitta retired to the “green room” in the church’s basement (which wasn’t green at all, actually.) The doors were opened, and the people who had amassed outside filed in. Before long the place was packed. Everyone who is part of the classical Indian music scene in New York City was there. Such is the immensity of Ustad-ji’s well deserved reputation.

At this point, it is probably relevant to mention the immense respect that Ustad-ji commands. It is quite noticeable. Having studied under him myself, I had the opportunity to observe what can only be described as a subculture echoing an ancient tradition. He forms an axis around which revolves a miniature society of students and aficionados. His students and assistants tend to his needs. Everywhere he goes – and he travels a lot – the events seems to coalesce into a world within a world, with him at the center. Such is the force of his personality and monumental accomplishments; balanced by a humble and unobtrusive nature. 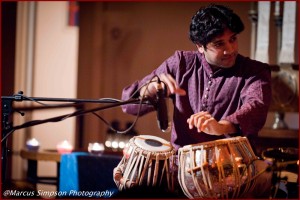 Before playing, Ustad-ji entered into a noticeable state of intense concentration. He was no longer in a church performing for an audience; he immersed himself into the music. The first notes of the raga rang through the church and washed over the audience. The power of the music drew everyone into the raga’s presence and mood. Experiencing the sad and almost tragic mood of this raga as a visceral sensation was impossible to escape. For my own part, I tried taking notes to write this article. I couldn’t write. At times, the sheer beauty of a particular musical phrase brought tears to my eyes. I wasn’t alone. Many times, the audience would gasp or nearly swoon in astonishment at the music he drew from his instrument.

He possesses a sense of drama and makes marvelous use of dynamics in his playing. He would, for example, during an alap, mute the droning strings, and coax a melody from the strings, bending each note until no more vibration could come from it; and drawing the listener into the soul of the music. Other times, while interacting with the tabla during a jor or jhalla, he would burst into a taan of blinding speed and complexity, seemingly out of nowhere, and running through the taal with unmitigated abandon, always landing on his feet. Never repeating himself, always bringing out new ideas, new colors, new shades of meaning from the raga.

One of Ustad-ji’s trademarks is his use of the tarb (sympathetic strings.) He is not content to merely let them resonate in sympathy with a note or harmonic, nor to merely strum them as an effect. He often plucks individual notes on the tarb that blend into the melodic statement he’s making. Those with no experience playing sitar may have difficulty imagining how difficult this is.

Often, after executing some musical impossibility, he would smile with glee and amusement. He seems to get a kick out of playing something incredibly difficult, as if he were standing aside watching some marvelous event. But this was no mere act of technical excellence (although he has plenty of that.) All the subtleties of the melodic unfolding, all the mathematical precision and aesthetic beauty of the taans were executed with an inexorable force and a natural beauty.

Nitin Mitta communicated with Ustad-ji effortlessly. He was more than equal to the task of standing next to Ustad-Ji, and displayed a flawless mastery of the tabla. His accompaniment held the rhythm and momentum of the music, and his solos were eloquent statements of the rhythmic beauty of the taal he was playing. His tone was muscular, with a powerful presence, yet not intrusive.

The first set ended on a quiet note; no bang at the end of a jhalla. It seemed appropriate to the mood of the raga.

After an intermission, Ustad-ji and Mitta took to the stage again. He began with raga Bihag. The mood of this piece was a noticeable contrast to the raga in the first set. It was lighter, more playful. It was like a stroll through a garden. As the raga developed, the intensity manifested itself. They played with an abandon that would have been reckless had it not been for their superb control.

They ended with Anar Anar; a piece based in Misra Khamaj that Ustad-ji usually ends his concerts with (and often mixes elements of other ragas with). He treated the lyrical demands of the composition with his usual mastery, imagination, and sensitivity. It was a fitting end to a marvelous concert. The music ended, and the audience came back to the mundane realities of this world a little richer, more at peace, and having had the mirrors of their souls clarified through music. Such is the service Ustad Shaheed Parvez Khan performs for humanity. 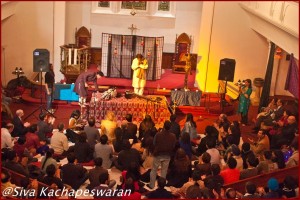 As I said earlier in this article, I had studied with Ustad-Ji, and am personally acquainted with him. While I cannot say I am one of his best students, nor are we close, I know him as a supremely confident man, with an immense inner power; yet possessing an old world humility, quiet grace, and good humor. It’s his world; and he sees to it that you are welcome as an honored guest in it. He’s someone you immediately like and are comfortable with; yet there is no mistaking that you are in the presence of an extraordinary person.

When I left the church, and took the train downtown, I met a woman who had attended the concert. She told me that she found the music amazing and transforming; and that it was her first experience listening to Indian classical music live.

She couldn’t have made a better choice.