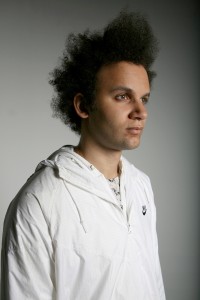 I clearly remember the day in Williamsburg when I first saw Tyondai Braxton making sounds, sitting surrounded by a circle of pedal effects in the middle of a street festival, sun beaming down, the East River a block or so away, one of a few performers set to play. He just sat blaring into a microphone, tweaking his electronics.

It was a summer in Brooklyn, probably 2004 or so, near Kent Ave., in the back alley/parking lot of a loft building on North 6th street. It was slightly disorienting because you’d watch his lips move, but you wouldn’t hear any change in the sound coming out of the blasting amplifiers on the street right away, and there were hundreds of people around, bouncing and drinking and stepping in and out of the swirl of this music.

But then something would shift, of the 6 or 8 or 10 sounds he had just sampled, one would drop out and something new would take its place and you’d feel the change, and then that process would happen again and then again, and all the while the crowd would be slowly swept into what he was cooking up, talking and strolling by, suddenly caught up in that web of sound being spun up and blasted out into the air. At some point, I remember seeing a friend in another band, and we nodded hello, and then later I noticed people from other bands like Black Dice and Gang Gang Dance moving around, and finally I saw the filmmaker Peter Bogdanovich stop by and listen for awhile, with a paisley ascot around his neck and a young lady at his side. At that point I remember thinking, “OK, this is one hell of a day for music in Brooklyn, and the Manhattan crowd’s coming to check this out.!?!….”.

Of course, at the Tully Scope Festival at Lincoln Center, that’s come full circle, as this was Tyondai Braxton’s debut performance, and by having the Wordless Music Orchestra of Brooklyn perform works by other avant-garde composers, Braxton was highlighted correctly in the second part of the night as a new young American composer, the Brooklyn experimental scene finally, and maybe for the first time, welcomed at the NYC home of classical music. Gone were the basic loop tracks of Braxton’s earlier works, but the aesthetic of that time and element was at the forefront of the compositions.

Braxton’s 2010 debut solo work, Central Market, has been hailed by the likes of Bjork (who was in attendance at this show to the delight of many a Brooklyn fan), and Pitchfork and the New York Times, as a landmark album, conceived by Braxton on vocals, and then transposed to different string and orchestral instruments for the live performances.

Previously, Braxton first jumped onto the scene, (disregarding the connection to his renown jazz saxophone playing father Anthony Braxton), as a member of the experimental rock group Battles, of which he has recently been disassociated with. In fact after the show, during the Q and A, he was curious to know if he was or wasn’t going to be on the new Battles album, in one way another, since he parted ways recently with the band, (famous for being comprised of members of rock bands Helmet and Don Caballero ﻿, and for selling out large venues, all over the US, Europe, and all around.)

Live at Lincoln Center, Braxton only performed on guitar and effects, with small vocal additions, and was a slight presence onstage, really letting the orchestra carry the music. There were other guitarists accompanying him,
definitely not a common sight at Lincoln Center, and the unusual additions to the Wordless Music Orchestra, like kazoo and harp, also worked to bring to life the exquisite and profound, yet cartoonish and manic pieces from Tyondai Braxton’s album. These started off with “Opening Bell”, and built up to “Platinum Rows”, which has the vocals shouting, “Run, Run!!!!!!!!!!!!”, continually over syncopated percussion and orchestral flourishes, that build and wane. Unfurling”, and the darker, more experimental “Dead Strings”, finished the night.

This is a new festival, one that will be taking place each Spring to feature more World and Experimental sounds, and from the reception at Alice Tully Hall, it seemed on it’s way to becoming a seminal event, in which the more staid Lincoln Center audiences can get hit by some more unusual, thrilling musical, and where new artists, and old artists who have never been presented on the big NYC stage up there at Lincoln Center, can have their time. Tyondai Braxton was an exciting edition to this new series.