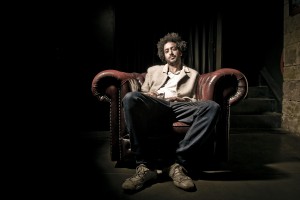 In New York city, musicians come from all over the world to hook up and put a band together in the hopes of touring the world and living that dream. The players in YEMEN BLUES are in the middle of that process, not yet “on top of the world”, but rising up and starting to play venues and cities farther and farther away from New York.

Recently at Le Poisson Rouge, Ravid Kahalani and 9 or so members of the band brought their folk-jazz-arabic-soul sound alive and had a packed crowd dancing along to songs sung mostly in Yemenite Arabic and partially in Hebrew and Haitian Creole. The catch with Kahalani is that he was born in Israel and in fact can’t even visit his homeland, yet since his father ingrained in him a love for the music of Yemen, he feels most comfortable singing in that vein. Other members of the band are from NYC, Uruguay, and other parts of the US. This mix, with oud, cello, viola, a horn section, flute,  and acoustic percussion, results in the bands unique funk and soul sound, but its Kahalanis’ distinctly Arabic vocalisations, (which can hit high falsetto and deep bass notes), which soar and groove and express as Kahalanis puts it, “…from the deepest part of me.”. Check out the exclusive video with Ravid Kahalani and some videos above and below.