DJ Olive (turntables) plays his “vinyl score” project. Absurd concrete turntable “shit” for a sitdown audience. Palettes of sound pressed on vinyl. Paint with sound. What you mix and what I mix will always be different but the sounds remain the same. The vinyl score. DJ Olive will play selections from his various vinyl scores.

Enjoy a night with Jazz musicians who you might not know but who have been around in this city for a long time. Playing themusic they love and believe in. Sabir Mateen – Reeds, Raymond A King – Piano, Jane Wang – Bass, Daniel Levin – Cello, Jason Kao Hwang – Violin, Michael Wimberley.

1st Prize winners of the Arriaga Chamber Music Competition in 2010, praised for “the strength and intelligence of their playing” (lucidculture.com), the members ofThe Grneta Ensemble have been enchanting audiences with their temperament, virtuosity and original concert programs. Initially comprised of clarinetists Vasko Dukovski and Ismail Lumanovski, the group became a trio in 2008, welcoming pianist Alexandra Joan and forming a unique combination of instruments. Read more about this ensemble.

The Residents is an American art collective best known for avant-garde music and multimedia works. The first official release under the name of “The Residents” was in 1972, and the group has since released over sixty albums, numerous music videos and short films, three CD-ROM projects, ten DVDs. They have undertaken seven major world tours and scored multiple films. Pioneers in exploring the potential of CD-ROM and similar technologies, The Residents have won several awards for their multimedia projects. Ralph Records, a record label focusing on avant garde music, was started by The Residents. Read more about this band.

Snehasish Mozumder is among those few established musicians in India who has mastered the art of playing the mandolin, and has blended it perfectly into the style of Hinduism Indian Classical Music. Recently, Snehasish was invited by Ravi Shankar to perform for the George Harrison Memorial Concert held at the ROYAL ALBERT HALL, London.

TIRTHA featuring pianist-composer Vijay Iyer, guitarist-composer Prasanna, and tabla player Nitin Mitta are highly accomplished artists who shift easily among multiple musical languages. Together, they have achieved an
exciting and truly innovative collaboration as a trio called Tirtha, with a newly released and critically acclaimed album of the same title on ACT music.

“Join us as we celebrate Drom’s Grand Reopening! Granted it may come a bit late, but to be honest we’ve been so busy keeping a jam packed lineup of great eclectic acts, we simply did not have a chance to celebrate Drom’s re-takeover of world music in the East Village.  Not to mention, we’d like a chance to extend a huge Thank You to all who make our vision possible. Invited are persons with a love for quality music, press, musicians, friends & family. Since April 1st seemed like the perfect date to host an awfully exciting, and somewhat foolish, Grand Reopening of Drom, we cordially ask you to raise a glass with us as we celebrate Drom’s mission for “Global Music for a New World”.
The evening opens with a special Cocktail Reception (invite only).  Just following, we open to the public with The Last of the International Playboys at 9pm. True to their name the Playboys are, “The Hottest of the Cool” playing Vegas Jazz and Latin Lounge. Next on the evening’s bill is Dario Boente’s latest project, Huge In Japan. Based on a solid foundation of jazz, Huge in Japan layers on the rituals of Argentina, the beats of Brazil and the beat of New York. Finishing out the night is DJ Andrea, master of African, Cuban, Latin and Global beats. In typical Drom fashion, the night promises to be full of great music, good company and a dash of the unexpected.”

As a result of the devastating earthquake and Tsunami that occurred on March 11th in Japan, and the subsequent Fukushima nuclear power plant crises, Taka Kigawa will present a Benefit Concert for Japan, the 100% of ticket sales of which will go to The Japan Earthquake Relief Fund created by the Japan Society, which was made possible by the generosity of the venue of this concert, (le) Poisson Rouge. Mr. Kigawa will perform solo piano pieces by leading Japanese composers: Joule by Dai Fujikura, Haiku for Pierre Boulez by Tohio Hosokawa, ATARDECER/A RETRACED by Hiroya Miura, Crystalline by Karen Tanaka; as well as works by composers who had great affection for Japanese culture: Images Book I by Claude Debussy, and Trois Mouvements de Petrouchka by Igor Stravinsky. [The program is subject to change.]

If you would like to make a donation but cannot attend the event, please write to Zan@lprnyc.com

15. Meta and the Cornerstones &  City Billies

Soul-reggae band Meta and the Cornerstones returns for the next monthly residency show. In the midst of finishing their new album, recorded at Kingston’s Tuff Gong Studios with Steel Pulse’s Sidney Mills, the shows have been featuring plenty of surprise guests and lots of extra love to spread around the room.

City Billies will warm things up with an opening set. Vocalist Sasha’mani Francois and guitarist Mark Anselm created roots band City Billies in early 2009 while casually discussing the basic similarities between traditional reggae and bluegrass music. Convinced that the two styles were destined to be joined together—by the percussive time kept by the rhythm instruments, as well as the themes of spirituality and tribulation—the two musicians began recruiting others to complete the sound. These days, the boys execute their new skanky, twangy sound with the help of banjo, mandolin, djembe drums and even the occasional saxophone, keeping the music rooted in acoustic sounds that are as much at home when heard through an amp as when played on a front porch. 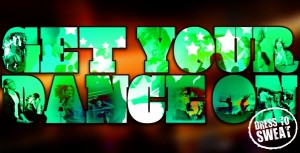 GYDO is back and better than ever with more of everything you love! It all starts with Aarona Pichinson’s Yoga SoundScape featuring live music to get you stretched out and ready to move. Then doors open up for our amazing DJs, live drummers + musicians, saunas, chill spaces, superpowered eats + drinks, live art, body painting, feather adornments from Dana Divine, and LOTS AND LOTS OF DANCING!

Born in Wales to Iranian parents, Roshi Nasehi performs a mix of original and Iranian material often at some of London’s most leftfield venues, alone or with her band (Roshi Featuring Pars Radio). Her debut EP And Stars (2008) and debut album The Sky And The Caspian Sea (2009) both received widespread acclaim across Europe and beyond from, amongst others, The Wire, Rock n Reel magazine, Tokalfi (Germany), Rockerilla (Italy), Camden New Journal and New Internationalist Magazine who described her album as ‘a début that exudes confidence, poise and promises the start of a great future’. Both records also received significant airplay on BBC Radio 3 Late Junction, The Verb, World on 3, BBC 6 music, RTE (Ireland) Norddeutscher Roadfunk (Germany) Ressonância Magnética (Italy) Sound Ways Through Sound (Australia) and many others. Her recently released EP Mehregan was experimental EP of the month in the Feb 2011 edition of Mixmag receiving 5 stars and describing her as ‘one of the most singular voices working at the moment.’

Schedule:
9pm  The Last of the International Playboys
11pm  Huge In Japan
12am   DJ Andrea