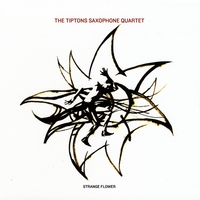 Strange Flower, recorded in June of 2010 and dropped this winter, is the 10th release by the The Tiptones Saxophone Quartet  (plus drums), the 6th since the band reformed in 2002, and the 2nd featuring the band’s current lineup of, Amy Denio  (alto sax, clarinet, voice),  Jessica Lurie  (alto & tenor sax, voice), Sue Orfield  (tenor sax, voice), and Tina Richerson (baritone sax, voice). Chris Stromquist (of Kultur Shock, Slavic Soul Party, and other fame) holds down the drums on this album.

The Tiptons are named for Billy Tipton, a successful big band saxophone player, pianist, and band leader who was born a woman but dressed and then lived as a man, in order to play the music that he loved without being relegated to novelty acts; except for a few family members and friends, most of Tipton’s friends and musical collaborators did not learn of his anatomical gender until after his death.

Like their namesake, the Tiptons are no gimmick but are in fact excellent players and songwriters both jointly and as a whole. They bring in an extensive range of musical experience and a repertoire which includes jazz, big band, Balkan, New Orleans second line, funk, various African, avant-garde, blues, Italian, and more. *Strange Flower *lives up to this eclecticism, taking the listener on a journey rich in variety, and undergirded by strong, funky beats.

The album starts with Denio’s tune “Agora.” All four horns and the drums jump right in with an ominous beat and bluesy melody. This is soon followed by some ferocious solos and duos, and right away the listener will notice that the band has a much larger sound than its five players, demonstrating that the lack of a chordal instrument is moot. The original theme is repeated only briefly at the end, and we are next treated to…

“La Luce Azzura,” by Jessica Lurie, which greets us with a funky, almost hip-hop beat, and a vocal statement of the song’s sad and beautiful melody before the horns come in. After several interesting variations of the theme, Tina Richerson plays a ferocious bari solo over a very funky beat. Then the sax players and drummer begin to weave in, out, and around each other in triple meter. The song reaches a peak with the band singing the theme over percussion, while Denio demonstrates her strong voice and incredible 5 octave range.

Up next is “Der Nister,” another Lurie tune, which shows off the Tiptons’ big sound and ability to turn on a musical dime; in this case from dreamy to funky and back and forth. Toward the end, one hears hints of Balkan influences creeping in as well.

Tina Richerson takes us down a jazzier path next with “Blue Cashews,” starting off with a very uplifting head, and then when the solos start moving into darker territory, only to resolve back into a more cheerful ending.

“Blue Cashews” is followed by “Song for Marjorie,” a dreamy, restful, gentle saxophone conversation over long tones. Then we return to the funk (in 6 this time) with “I Klaxon della Notte,” which takes a group journey in several phases of interlocking rhythms and melodies.

We next visit full-on big band territory with Richerson’s “Locking Horns;” once again the Tiptons sound much larger than a quartet during the right-out-of-the-jazz-age-and-yet-fully-contemporary head; the song proceeds into several solo sections, including a strong drum solo by Chris Stromquist and an uptempo shredding by Richerson.

After the upbeat “Impish,” which swings with hint of funk, comes Sue Orfield’s “Inner Pippi,” another fine  demonstration that the Tiptons would be right at home in a Prohibition-era speakeasy.

But before we, the listeners can get too comfortable in the beat, the Tiptons shift gears again into the odd-time rhythms (in this case 11) and exotic scales of the Balkans with Denio’s “Sheltering Storm.” This song also features Denio’s clarinet work.

Once again, we are treated to an unusual juxtaposition which nonetheless works, with the next piece, Orfield’s “Slide Over Baby,” an energetic number which gives unequivocal proof that four saxophones and a drummer can, indeed, play bluegrass, no matter what the purists say.

The album concludes with “Strange Flowers,” a dark and angular piece with singing by Denio and the band, and text by Rafil Kroll-Zaidy.

Overall, the album is eclectic and yet flows well from one song to the next; it stands up very well as a unit. The Tiptons are lucky to have four fine musicians who work very well together, and who can all write in a variety of genres. This reviewer strongly recommends Strange Flower, and further recommends that you try and catch the Tiptons live at the earliest opportunity.

Read more and videos of  The Tiptones