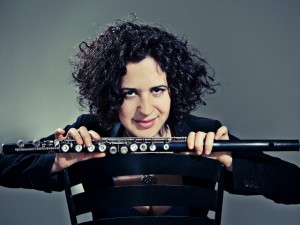 April 2nd, one day after my fool’s day birthday, I got an email from Hadar Noiberg:

“Dear Sohrab Saadat Ladjevardi,
My name is Hadar Noiberg and I am a flutist and composer based in NYC. I am a part of Yemen Blues which performed in LPR two weeks ago. I have a trio with two world renowned musicians, Ziv Ravitz on drums and percussion and Edward Perez on double bass. The music embodies the cultural/musical diversity of Israel, fusing Middle Eastern influences with jazz improvisation to create a new and unique sound (all compositions are original).I would like to invite you as special guest to my CD Release concert at Drom on April 13th at 9.30pm.”

Unfortunately I couldn’t go to see her show because of my own recording session. So instead I invited her to come to Michiko Studios, (where I work as a music program director and studio manager), for a video interview and asked her to bring her flute with her. As I always do I interviewed her in three parts for about 10 minutes and the fourth was a live flute performance playing “Persian Love Story” from her new CD Journey Back Home. Speaking of the whole interview: I really enjoyed it. For a change it was great and interesting to speak to a lady about her music and life. She being an Israeli woman and me being an Iranian man made this interview some thing special. Please enjoy!

Part 1 is about her personal background, Israeli musicians in NY, the NY music scene, her country, and being a woman.

Part 2 is about woman’s issues in general and what Israel music is in general.

Part 3 is about the new CD, music business, being involved in latin music, coming projects in 2011 and her collaboration with YEMEN BLUES.

Part 4 finds her playing the flute on “Persian Love Story”. Unfortunately the last 30 seconds of the performance didn’t make it in the video.