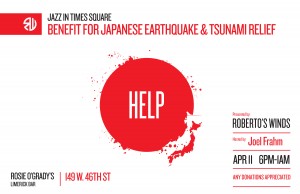 All over the world, groups small and large, have been gathering and doing whatever they can to raise money to send to Japan in efforts to help those who have been hit or swept away by the destructive waves of tsunamis or radiation. In NYC, the outpouring of emotion and support has been equal or more than other cosmopolitan cities around the world, with Japanese artists abroad here joining forces with international counterparts and locals to just gather and recognize the intensity of the situation there now, and raise simple amounts of money to help. They’ve all been adding up and helping in ways small and large.

For us here at DooBeeDooBeeDoo, the opportunity came to do a benefit for Japan, in conjunction with Roberto’s Winds and MICHIKO STUDIOS, at Rosie O’Gradie’s Limerick Bar in Times Square, April 14th, 2011. (Read more about this event, including Roberto.)

This benefit was the result of DooBeeDooBeeDoo’s own Sohrab Saadat Ladjevardi working with Roberto Romeo and crew in their saxophone and wind specialty shop and rental studios, which has been operating in Times Square for years. Both Roberto and Sohrab recognized that it would be the right thing to do, and a great opportunity for some of NYC’s top jazz sax players to get together to raise some money for Japan.

All proceeds from this night, a total of $2005.00, were raised and donated to the John Coltrane House of Osaka, which is a local organization dedicated to spreading the musical and spiritual legacy of John Coltrane to young and old jazz players and afficionados in Osaka, Japan.

As Sohrab explained to me, the Coltrane House of Osaka is a throwback and relic of the 1960’s, when tiny western style coffeeshops began springing up in small towns and villages around Japan, featuring live jazz performances and an ambiance of community and engagement, where locals gathered to talk of revolt against the establishment, civil rights, and any new ideas that might have been floating through the air at this time (much like coffeehouses in America and Paris before that). It was in one of these that Sohrab (founder of this site and jazz sax player), first became intrigued and inspired to take up the saxophone (around 1976, at the late age of 26). Surely this influence spread to loads of young artists, musicians, writers, and activists at that time.

A number of these same places were wiped out by the March 11th tsunami, and it is in this direction that the money fro our NYC fundraiser will be devoted, according to Yasuhiro Fujioka, of the Coltrane House of Osaka. As Roberto’s liason in Japan, he is directing the money straight to the Iwate Jazz Kissa Renmei fund (aka Iwate Jazz Club Association members). The following clubs were affected by the devastation, and will recieve portions of the relief funds:

1. The Queen of Ohtsuchi jazz cafe was completely destroyed by the tsunami, and an owner’s, (Mr. Kenichi Sasaki), wife died.
2. Mr. Yoshitaka Sugaya, so-called Kaicho, President of Jazz Kissa Association, is still missing as a result of the tsunami.
3. Mr. Katsuhito Konno, owner of Town Hall of Kamaishi city, is going to lose his Town Hall because the first floor has completely been damaged and he needs to move.
4. Also, the club Basie, of Ichiniseki, has been damaged by the earthquake and daily and nightly aftershocks that continued for days. 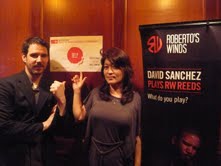 We had a lot friends from around NYC and all over stop by to send their love and good energy, and money. Incredible jazz music, improvised and straight, were the background, and all left feeling united and simply a small part of a larger community, trying to help out other like-minded people from another place in the world. All recognized that at any time, the circumstances could switch, and we could all be in that place, in the same need.